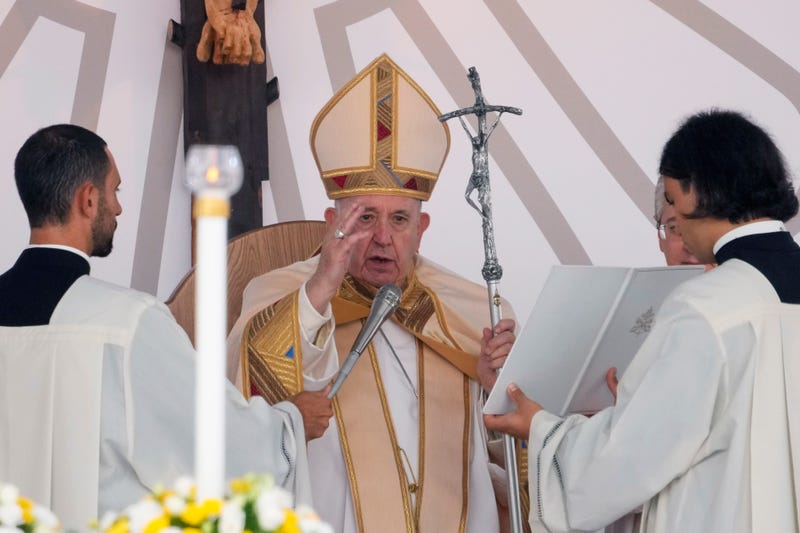 MATERA, Italy (AP) — Pope Francis traveled to southern Italy on Sunday to close out an Italian church congress that coincided with Italy’s national election, and delivered a message that hit on key domestic campaign issues including immigration.

Neither Francis nor his hosts referred to the vote during the open-air Mass, though Italy’s bishops conference had earlier urged Italians to cast ballots in the eagerly watched election that could bring Italy its first far-right government since World War II.

At the end of the outdoor Mass in Matera, Francis spoke off the cuff asking Italians to have more children. “I’d like to ask Italy: More births, more children,” Francis said.

Italy has one of the lowest birth rates in the world and Francis has frequently lamented its “demographic winter.”

Far-right leader Giorgia Meloni, who campaigned on a “God, family and homeland” mantra, has also called for Italy to reverse its demographic trends by proposing bigger financial incentives for couples to have children.

Francis also weighed in on a perennial issue in Italy, recalling that Sunday coincided with the Catholic Church’s World Day of Migrants and Refugees. Francis called for a future in which “God’s plan” is implemented, with migrants and victims of human trafficking living in peace and dignity, and for a more “inclusive and fraternal future.”

He added: “Immigrants are to be welcomed, accompanied, promoted and integrated.”

Meloni and her center-right alliance have vowed to resume a strict crackdown on migrants coming to Italy via Libyan-based smugglers. The center-left Democratic Party has among other things called for an easier path to citizenship for children of newcomers.

The Mass was celebrated by a protege of Francis, Cardinal Matteo Zuppi, who is head of the Italian bishops' conference and has a long affiliation with the Sant'Egidio Community, a Rome-based charity known for its outreach to migrants and the poor.

The 85-year-old Francis appeared tired during the visit, which was scheduled before Italy's snap elections were called and came a day after he made a separate day trip to the Umbrian hilltop town of Assisi. Francis has been using a cane and wheelchair this year, due to strained knee ligaments that make walking and standing difficult.

His trip to Matera, the southern Basilicata city known for its cave dwellings, underwent a slight, last-minute change due to storms that belted much of the Italian peninsula overnight: Originally scheduled to fly by helicopter Sunday morning from the Vatican’s helipad, Francis instead flew to Matera by jet from Rome’s Ciampino airport.