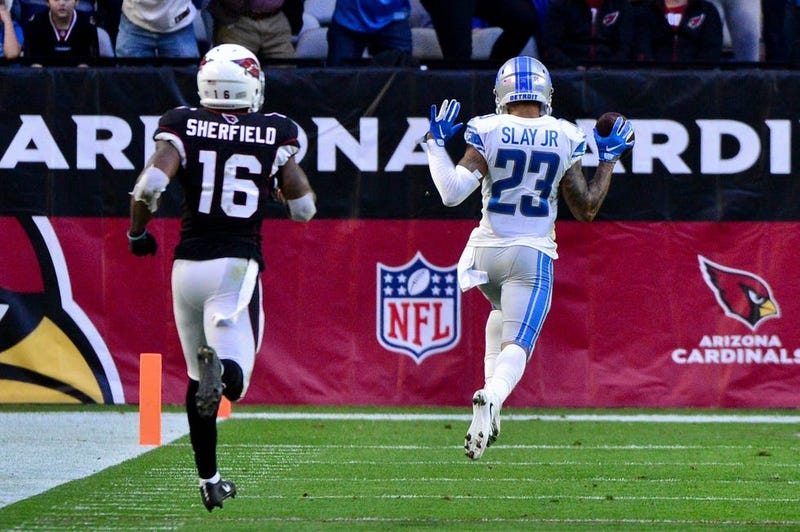 If Darius Slay's contract dispute isn't yet officially a 'holdout,' it's pretty darn close to getting there.

He said on Thursday there's a possibility he won't report for training camp next month.

"Will I be there? We'll see," Slay told the Pride Podcast. "Time will tell."

Slay, 28, hasn't attended any of the Lions offseason activities, including mandatory minicamp last week, as he aims for a new deal. He's signed through 2020 with an average annual salary of $12 million that ranks 13th among cornerbacks. The 2018 Pro-Bowler feels he deserves more.

If Slay indeed sits out training camp, he'll forfeit $40,000 per day. He's already lost about $335,000 in workout bonuses and fines for skipping minicamp. The same goes for Damon Harrison, who's also pursuing a payday.

In his past two seasons, Slay has 11 interceptions and 43 passes defended, while playing against the opposition's top receiver on a regular basis. He's the only player in the NFL with more than 10 picks and 40 passes defended over that span.

Asked further about his contract, "I ain’t getting into that," said Slay. "I’m going to let my agent and the organization kind of handle all that. I’m just going to be chill about it and see how it all plays out."

His absence (and Harrison's) has lingered over the Lions during team activities. But his teammates remain in his corner.

"We love Slay. That’s been a big brother to me ever since I walked in the door," said Teez Tabor, who has stepped into Slay's role on the first-team defense. "Nothing but the utmost respect for big bro. Not having him out here, we miss his presence, but we still have to come out here and work and do what we do. That don’t stop just because Slay’s not here.

"I’m pretty sure that he has his reasons for what he’s doing right now. ... I know if he has something going on that he needs to handle, then that’s what he’s gotta handle."