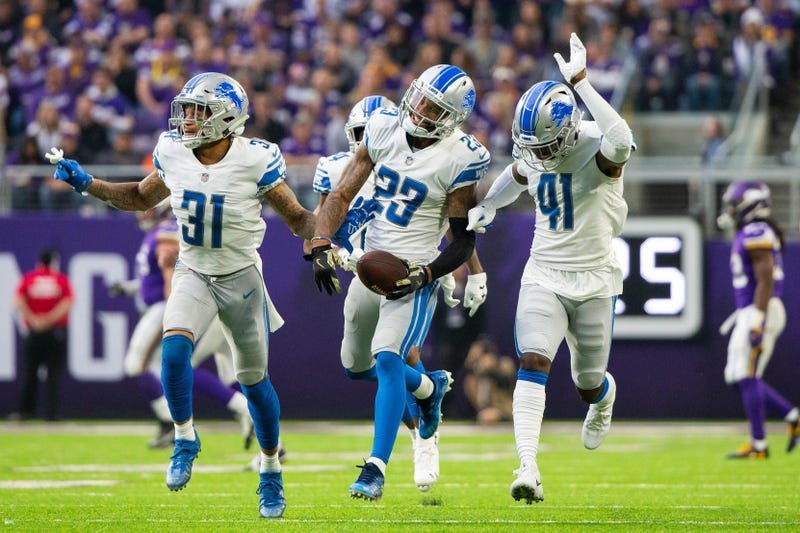 Make no mistake, Darius Slay is pumped for the Lions' home opener on Sunday.

"I’m ready, ready to hear it. Gonna be fun. Lights back on, loud in there. I’m ready to see what the fans are gonna bring," Slay said Thursday.

But if he's being honest, there's one thing he'd like to change about the whole experience at Ford Field.

"I love everything about the home atmosphere. The only thing I’m almost starting not to like is our touchdown song," he said. "Oh my gosh, I’ve heard it so much."

You know the one.
Forward down the field...

That would be 'Gridiron Heroes,' the Lions' theme song since the 1930's. It blares on the stadium loudspeakers at Ford Field anytime the home team scores. And in his seventh season with the Lions, Slay is growing a little weary of it.

"I like hearing that song, but it’s like, god, can we get another one? Can’t we rotate it or something?" Slay said. "It’s not a bad song, it’s just, dude, I’ve heard it for, like, six years straight. I don’t listen to the same song for 24 hours. Next!"
Well, a reporter responded, at least it's better than that horn they play at Vikings games.

"I like the horn, though," said Slay. "I actually love the horn."

Then he imitated the famous 'Vikings, Skol' chant, clapping his hands over his head.

"That is gangster," he said. "I would love that. They by far got the best stadium in the NFL."

The Bears theme song? No thanks, said Slay.

"Weak, weak, weak. Nobody got nothing on Seattle and Minnesota. Oh my gosh, I be getting crunk with the crowd!" said Slay.

Then he went back to doing the Skol chant.

"I’ll be on the sideline like, I love that chant. They got the best chant in the world. We can’t compete with that right there," said Slay. "We want to be the best in the division, we gotta be the best in all categories -- touchdown celebrations, kickoff celebration, kickoff theme song. We gotta be better."

While some Lions fans might agree 'Gridiron Heroes' is getting a little old, they'll want to hear it a lot on Sunday. So will Slay.

Just don't expect him to be singing along.