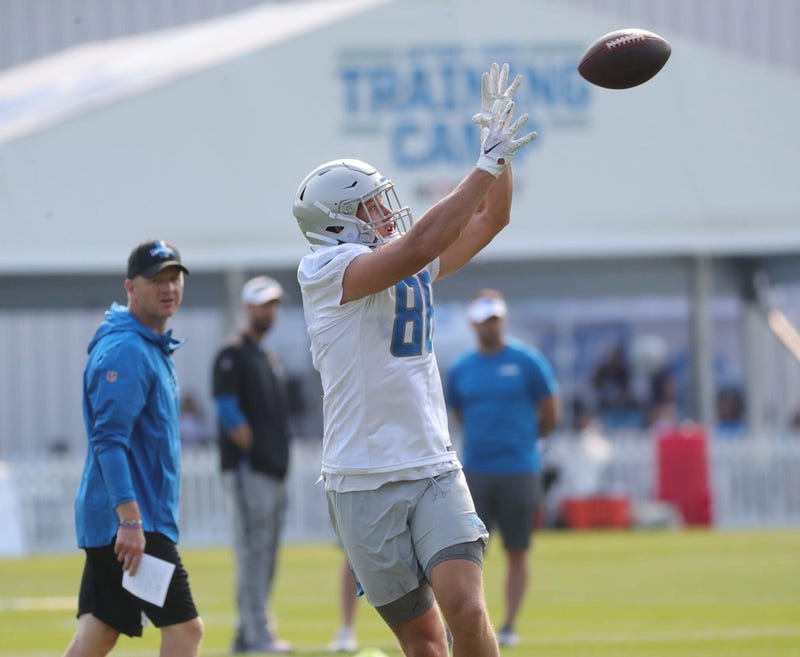 T.J. Hockenson has been on the Lions roster for a matter of months, but Matt Patricia already has a feel for the team's first-round draft pick.

With Hockenson, a 6'5 tight end with big hops and a grounded disposition, what you see is what you get.

"I would say the great thing about T.J., from what we’ve so far, is that he’s consistent," Patricia told the Jamie and Stoney Show on 97.1 The Ticket. "That’s a big thing for us, especially with guys that are still trying to make that transition into the NFL. Being on the type of schedule that we’re on, they’re not really used to that. It’s all about football. There’s no other obligations, no other responsibilities than that, and he's just been the same guy every day in the building.

After the Lions finished 24th last season in red zone efficiency, there's a chance for Hockenson to make an immediate impact.

Fun Fact: @TheeHOCK8 is a playmaker on the field pic.twitter.com/6Iq3B2ZcL5

This duo is going to be something special: Stafford & @TheeHOCK8 pic.twitter.com/8Oyo8ky3iz

Hockenson is entering the NFL under unique circumstances. He's just the fourth tight end this century to be drafted in the top 10, and the first since Eric Ebron -- who didn't exactly pan out in Detroit.

If that puts added pressure on the 22-year-old, he says he doesn't feel it.

"I'm coming in today and trying to do as best I can today, so I'm not really thinking of it as pressure. I’m not really thinking of it as anything," he said last week. "I’m just coming out to this field and playing the game that I love for a living. What’s better than that? So you can’t think of it like that. You have to come in, study, do different things and expect that your preparation will translate to the field."

So far it has. In fact, Hockenson has generally made the transition look easy, which isn't to say it's been easy.

"All of it's been a challenge," he said. "To sit here and tell you it hasn’t is an understatement. It’s the next level. Everything's faster, everything's more dynamic, everyone’s smarter. The defense can see a formation one time and know the play, so you have to be smarter than the 10-year vet that’s in front of you.

He has a long way to go to get there. And the rookie would be the first to admit it. Asked about the success he's had in training camp, specifically the plays he's made in the red zone, Hockenson brushed it aside.

"The day before doesn’t really matter," he said. "I'm going to go in these meetings, watch it and then tomorrow I’m going to come out here and try to do better than I did today. I'm not really looking at it like (a confidence boost). I'm looking at it like I need to get better tomorrow."