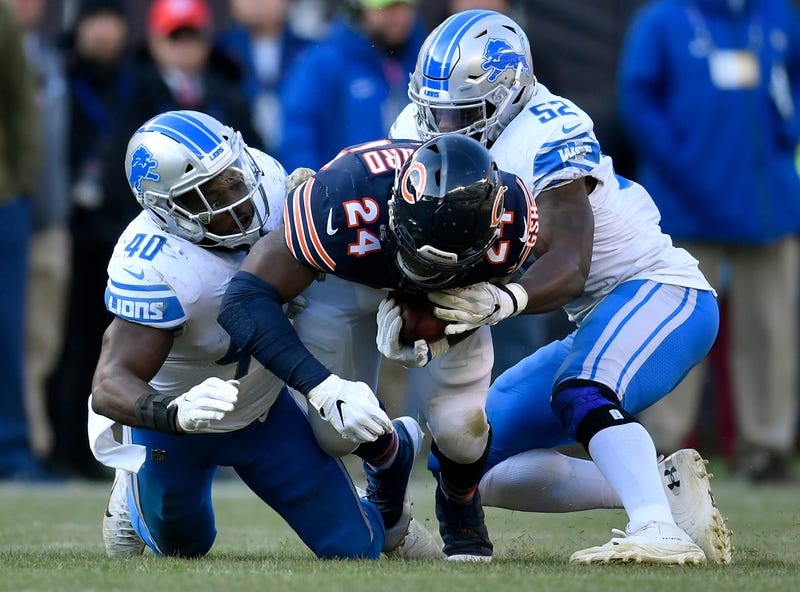 Photo credit Quinn Harris / Stringer
By Will Burchfield, 97.1 The Ticket

It was clumsy at first, but the Lions defense eventually hit its stride last season under Matt Patricia. By the end of the year, it was one of the stingiest units in the league.

Just how much did it improve from Week 1, when the Lions were throttled by the Jets, to Week 17, when they shut out the Packers?

"We were extremely confident in what we could do," linebacker Jarrad Davis said on Wednesday as veterans reported to Allen Park for the start of training camp. "Hard to really put a grade on it, but it was almost night and day."

As they enter the second year in Patricia's system, expectations are high. On top of excelling in the second half of last season, the Lions added Trey Flowers and Justin Coleman in free agency and spent four of their first five draft picks on defense in linebacker Jahlani Tavai, safety Will Harris, defensive end Austin Bryant and cornerback Amani Oruwariye.

The front seven is especially loaded. And with the creative ways in which Patricia utilizes his linebackers and defensive linemen, Davis expects that group to do some serious damage.

"I’m just really excited to give offenses more of a headache. Honestly," he said. "There’s so many of us that they have to block, and they can't block everyone of us. Someone’s going to win a one-on-one and make a big play. That’s what we’re here to do. I’m just excited to have the multiplicity and (see) everybody on the defense really be able to use different tools to just mess with offenses."

The effect of 'multiplicity,' a longtime hallmark of Patricia's defenses, was shown last season when the Lions recorded 43 sacks -- tied for their most since 2010 -- while rarely ever blitzing. Two of their three sack leaders were linebackers in Davis and Devon Kennard.

Davis is looking forward to getting after the quarterback even more in 2019. He spent part of the offseason working with a noted pass-rushing guru, and smiled when asked if the prospect of playing alongside the versatile Tavai will give him more chances to set his sights on the backfield.

"I just want to be able to add more to my game and help the defense out. I can drop in coverage every play, but to be able to come in and rush the passer is super nice, too," he said. "It's just fun to be able to go out and make an offense guess: 'Am I coming? Am I dropping? What am I doing?' I love that."

When the defense stumbled out of the gate last season, it was undone by the run. Then -- at the risk of oversimplifying things -- the Lions acquired Damon Harrison and everything changed. After allowing an average of 142.5 rushing yards over their first eight games, they held opponents to just 77.6 yards over their final eight.

By season's end, the Lions ranked 10th in rushing defense, 8th in passing defense and 10th in total defense. Only four other teams ranked among the top 10 in all three categories.

"Those first couple games when we were just getting gashed by teams and they were running through us like that, it was terrible. It kind of breaks your morale," Davis said. "But as the season went on and we started to really fine-tune and sharpen our tools, it really helped us just know that, 'Hey, we’re a dominant defense. We just have to stick to what we do best and go out and do it the best we can.'"

They proved it over the final seven weeks of the season, holding opponents to an average of 16.5 points. Now they'll get a chance to prove it over 16 games.