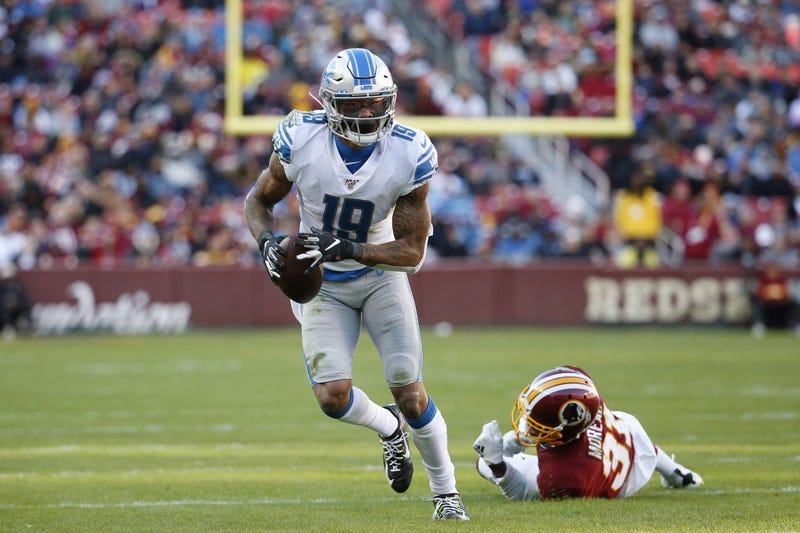 What's the most dangerous receiving duo in the NFL? Take a look this Sunday, when Chris Godwin and Mike Evans lead the Buccaneers into Detroit.

They rank second and third, respectively, in receiving yards. They're the only tandem in the league with over 1,000 a pop. They've combined for 17 touchdowns. If you stop one, you're not stopping the other. You might stop neither. Together, Evans and Godwin have fueled one of the most explosive passing attacks in the NFL.

The only duo in the league that's produced more touchdowns? Kenny Golladay and Marvin Jones. Only now that duo has been whittled down to one, after Jones was placed on injured reserve Tuesday with an ankle injury.

So when Buccs coach Bruce Arians was asked Wednesday what stands out about the Lions' offense, his answer came as little surprise.

"Golladay, that’s for sure," he said.

On the heels of a breakout season, Golladay is back for more. He leads the NFL with 10 touchdown catches and he eclipsed the 1,000-yard mark last week. Even with the Lions down to their third-string quarterback, Golladay continues to tear open defenses. His 19 catches of least 20 yards are second only to Godwin.

"Just every game," said Arians, "there are big plays."

When Golladay arrived in Detroit, he earned comparisons to Calvin Johnson. A few years later they're ringing true. No Lions receiver has done this kind of damage since the best one in franchise history. When Arians watches Golladay play, he's reminded of someone else.

"He reminds me a lot of Mike Evans. He’s a big, active guy that gets down the field and 50-50 balls he comes down with. I think he’s really a hell of a player," Arians said.

Evans is an unquestioned No. 1 receiver in the NFL. His numbers rival those of anyone at his position since he entered the league as the seventh overall pick in 2014. With his long strides, massive catch radius and ability to make plays all over the field, Evans represents what Golladay is starting to become.

In a word, uncontainable.

"He can be the best receiver in the league," Golden Tate said of Golladay earlier this season.

The numbers make that hard to dispute. Aside from total receptions, Golladay is right there with the elite receivers in the game. His emergence is one of the lone bright spots in an otherwise dismal season for Detroit.

That he's doing it as a third-round pick, with a cap hit under $1 million this season and next, makes him all the more valuable to the Lions. And just as much of a problem for everyone else.

"His run after the catch for a big guy, like I said, reminds me so much of Mike Evans. So yeah," said Arians, "he’s a hell of a threat and a challenge for us."