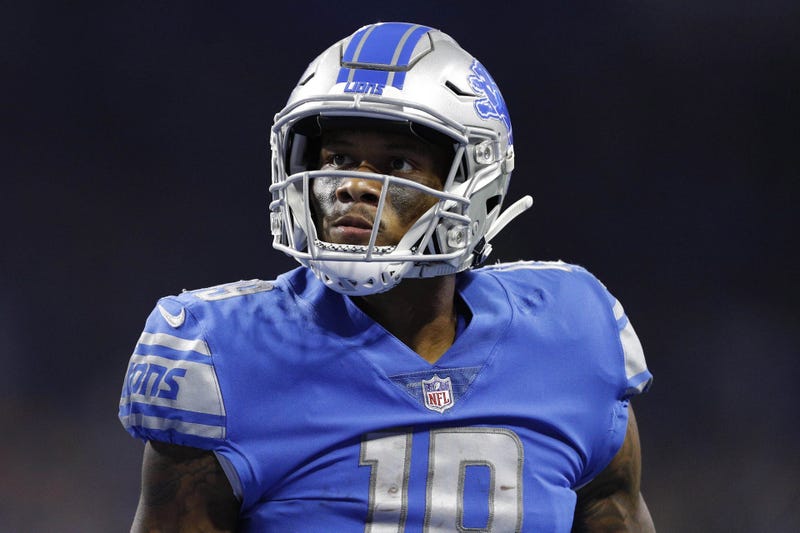 Lions GM Bob Quinn is looking for more playmakers. The Steelers are looking -- and likely -- to trade Antonio Brown. Detroit has the cap space to afford him.

It's a match that's spawned the idea Brown could be a member of the Lions by the start of next season.

No thanks, says Kenny Golladay.

"To be honest, I feel like the Lions are good where we’re at," Golladay told the Karsch and Anderson Show on 97.1 The Ticket.

"No offense to Antonio Brown, he’s gonna go down as one of the greats, an amazing player," Golladay said. "But with me, T.J. Jones, Brandon Powell, Chris Lacy, Bruce Ellington -- I mean, the list just goes on. All those guys have made plays this year. I have trust in those guys and I know the organization does as well."

Absent from that list, for whatever reason, are Marvin Jones and Andy Jones. Even with them on it, it's not the most inspiring group of wide receivers. T.J. Jones and Ellington, two unrestricted free agents, are question marks to return. Powell caught 11 passes for 129 yards. Lacy, an undrafted free agent who signed with the Lions last spring, didn't play until the final game of the season.

As for Marvin Jones and Andy Jones, the former had 35 catches for 508 yards and five touchdowns before his season ended due to a knee injury he suffered in Week 10, while the latter caught 11 passes for 80 yards and a touchdown. The tight end group, as presently constructed, doesn't make the picture any brighter. Even Quinn acknowledged at his season-ending press conference that the Lions need to put better personnel around Matthew Stafford.

Still, Golladay believes the wide receivers group is just fine. For a quietly self-confident player coming off a breakout season, that's probably to be expected. ​Golladay caught 70 passes for 1,063 and five touchdowns in 2018, continuing to produce in the absences of Marvin Jones and Golden Tate.

“The goals I did set, I kind of blew those out the water, which is good. That’s fine with me," Golladay said toward the end of the season. "It just gives these coaches an opportunity to see what I can do by myself, without the help of other guys around me.”

Golladay's big year made him one of five nominees for the Vizio Top Value Performer, awarded to that player whose performance most exceeds the value of his contract -- as determined by the fans. A third-round pick in 2017 whose cap hit was about $765,000 this season, Golladay has a strong case. The other nominees are Cincinnati receiver Tyler Boyd, Green Bay linebacker Blake Martinez, Denver running back Phillip Lindsay and Seattle running back Chris Carson.

Fans can vote at tvp.vizio.com/.<p