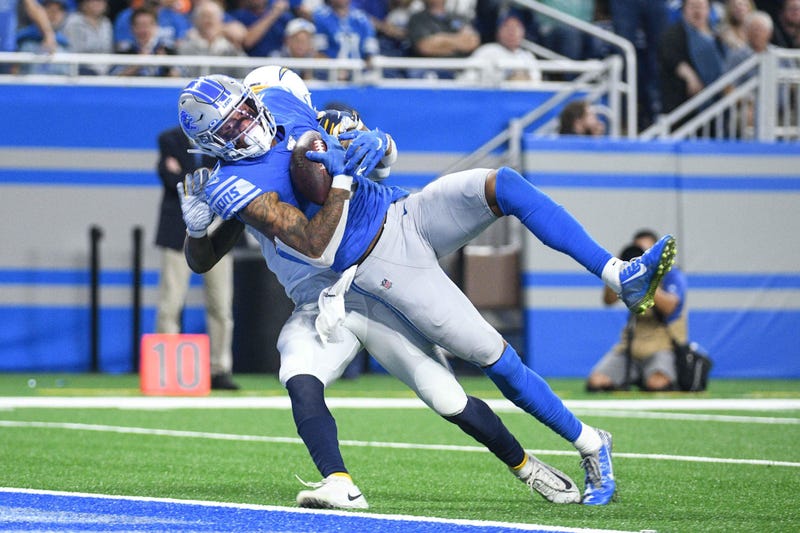 Kenny Golladay came down with the ball in the end zone, then stood up and flung it high above his head.

It was an emotional reaction to putting the Lions in front and officially putting last week behind them.

"When did it come down?" he said with a smile.

Who knows. And who really cares. What mattered was the catch, Golladay's eighth of the day, tying a career high, and the fact that the Lions led for the first time in the game. The 31-yard touchdown strike proved to be the difference in Detroit's first win of the season.

"It was just exciting," said Golladay. "Had some balls I should have caught last week, so I just had to go make that one."

It was no gimme, but Golladay holds himself to a different standard. He expects to make the plays that other receivers simply can't. Like when Matthew Stafford threw one up in the end zone in overtime last week against the Cardinals, and Golladay couldn't secure it. It was a fitting end to a day that saw Golladay make just four catches on nine targets.

Clearly that stuck with him, and on Sunday he corrected it.

With about seven minutes left in the game and the Lions trailing by four, Golladay ran the kind of post route that makes him such a nightmare for opposing corners. Stafford put it where only Golladay could catch it, and the receiver took care of the rest. He left his feet at the five-yard line, a 6'4 missile soaring through the air, and landed in the end zone with the ball clutched to his chest.

Cornerback Casey Hayward, who picked off a pass intended for Golladay in the end zone earlier in the game, wasn't really beat on the play. But Golladay bested him all the same.

"Kenny did a good enough job using his big body to wall the corner off," said Stafford, "and I tried to shoot one in there. I think it ended up in a good spot.”

The catch pushed Golladay to 117 yards on the day, the second highest total of his career, and it came on his tenth target, the kind of efficiency he strives for. It was more evidence of Golladay's standing as Detroit's No. 1 receiver and its most dangerous offensive weapon, and further proof that Stafford trusts him in the biggest spots.

Their chemistry can be a potent formula.

"It’s still growing," Golladay said. "I feel like he has a little bit more trust in me that I will go up and make those plays. Like last week, just steady giving me shots, shots. For a guy that has trust in me, I want to