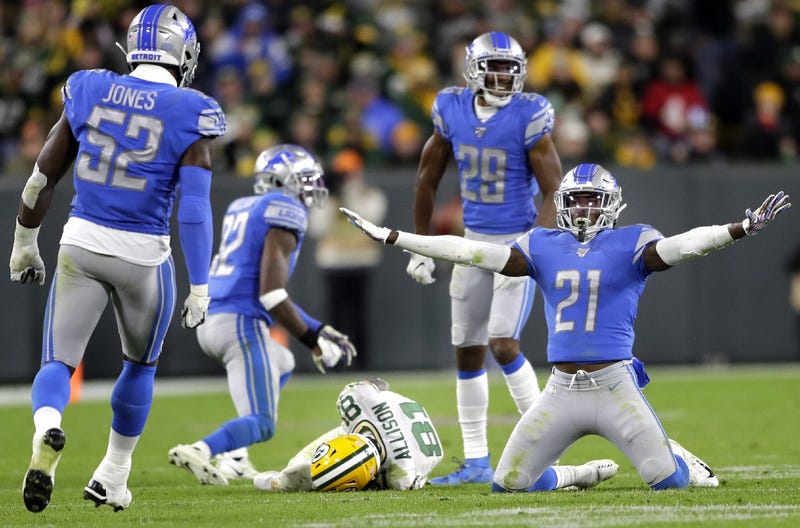 Trey Flowers still had his pads and uniform on well after the Lions' crushing loss to the Packers Monday night, trying to make sense of how a win was taken away from his team.

The referees made a number of questionable calls against Detroit in the second half, and Flowers paid for their two most egregious mistakes. He was flagged for illegal hands to the face on a pair of crucial third downs in the fourth quarter, giving the Packers the second chances they needed to flip a 22-13 deficit into a 23-22 win. In neither case did Flowers appear to deserve the penalty.

"I was working a move, they saw something different than what actually happened, and they called what they thought they saw," Flowers said.

After the first call, which came on a third-and-10 play with about 10 minutes left in the game and negated a sack that would have forced a Packers punt, Flowers said he "changed the position of my hand" while rushing against offensive lineman David Bakhtiari. It didn't matter. He was flagged for the same thing on Green Bay's next drive, this time on third-and-4 from the Lions’ 16-yard line with 1:36 to play.

The first penalty allowed the Packers to score a touchdown. The second allowed them to run down the clock and kick a game-winning field goal as time expired.

"If I slipped up right here (under the chin), then I would say that was a flag. Never slipped, kept it right here (on the collar). He saw it as hands to the face, that’s what he called."

Umpire Jeff Rice threw both penalty flags, and referee Clete Blakeman said in a pool report that there was contact to Bakhtiari's neck.

“The last one was really the only one I’ve discussed with him,” Blakeman said. “Basically, it’s for illegal use of the hands, hands-to-the-face foul. To be a foul, we basically need some forceful contact that’s prolonged to the head and neck area of the defender. So in his mind he had pinned him back, it was prolonged, and that’s what created the foul."

Flowers wasn't the only one victim of a questionable call. Safety Tracy Walker was flagged for unnecessary roughness when he made incidental helmet-to-helmet contact with receiver Geronimo Allison while going for an interception on the opening drive of the third quarter. That drive ended in a field goal.

"The reality is, it is strict liability for a defensive player. In this case, he may be going for the ball and not intending to hit the helmet, but when there's helmet contact, it is a foul in that situation," he said.

The referees also appeared to miss an obvious pass interference call against the Packers when Marvin Jones was mugged on a deep ball on Detroit's final drive. All of it led to the final result, with the Lions feeling like they were robbed.

"Extremely pissed off right now,” Walker said. “Disappointed. Hurt. We had that game. I’m going to say the same sh*t, we should have won it. It is what it is, though. Got to bounce back.”

Asked who he was angry at, Walker said, “Honestly, just the whole game in itself.”

“I feel like we could have had a better game and we were supposed to come out victorious, but Green Bay came to play,” he said. “There was some awful, awful calls, but we got to play through that. We got to overcome those. We didn’t, obviously, and we came up short.”

Told he might get fined for his comments, Walker said he didn’t care.