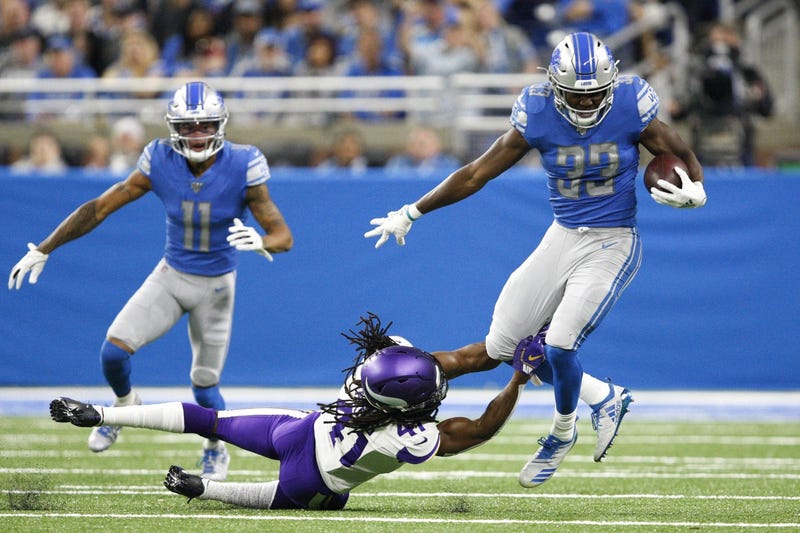 For the second season in a row, Kerryon Johnson will miss significant time.

The Lions are placing their starting running back on injured reserve after he underwent a knee operation, Matt Patricia told reporters on Tuesday. Johnson injured his knee in Sunday's loss to the Vikings.

He will be eligible to return Week 16 versus the Broncos. The Lions finish the season a week later against the Packers.

Patricia said Johnson was "doing well, in good spirits and everything" following the procedure Tuesday morning.

"I obviously feel really bad for Kerryon that he is in this situation," Patricia added, "but I know he’s a tough kid and works really hard, so I'm very optimistic about everything going forward."

Johnson, who also missed the final six games of last season with a strained knee, entered the NFL with a troubling history of injuries. He underwent surgeries on his shoulder (twice) and his hand in college, and dealt with ankle, hamstring and rib issues as well.
The Lions limited Johnon's workload as a rookie, cognizant of keeping him fresh, but they've ramped it up this season. He's gone from 11.8 carries per game to 15.3, which ranks 13th in the NFL.

Meanwhile, he's fallen in yards per carry from 5.4 to 3.3, which ranks 39th. Detroit's run game, the focal point of Darrell Bevell's new offense, has struggled as a whole. Now the challenge will get tougher.

Asked about the long-term durability concerns for Johnson, Patricia said, "In Kerryon’s case, he’s such a great kid and he works extremely hard. I’ve been around players before that have had a lot of injuries earlier in their careers and setbacks, and then have had nothing for six or seven years after that. We’ll take them all case by case and just see how it goes."

In Johnson's absence, the Lions will turn to the duo of J.D. McKissic and Ty Johnson as well as the recently-signed Tra Carson.

"We’re prepared to go running back by committee, or whoever is out there that is ready to go," Patricia said.

If the Lions wish to trade for a more established back, they have a week to do so. The trade deadline is Oct. 29.

"We’re always trying to improve our roster every single day as best we can," Patricia said. "Whatever those opportunities are, I’m sure Bob (Quinn) and his staff, they listen a lot of different conversations. They take care of themselves when they present themselves. For us right now, obviously we’re just focused on the guys that are here."