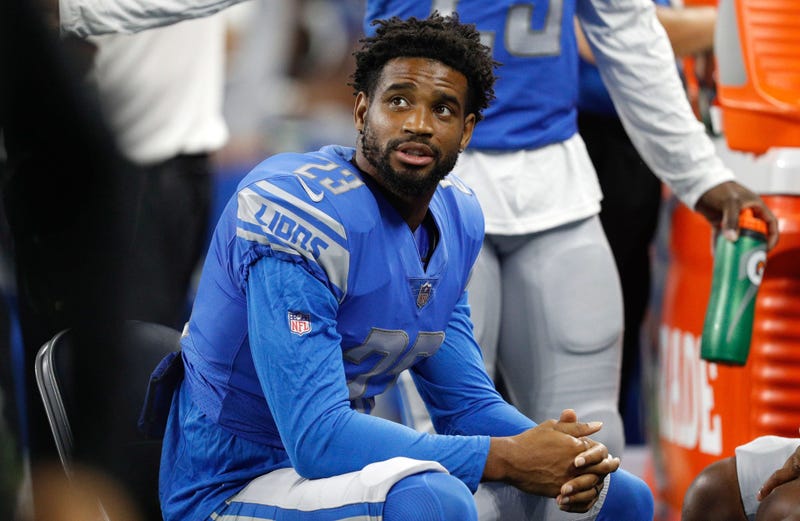 Darius Slay may have watched his final game with the Lions from the press box at Ford Field. That is, if he was in the building.

With Slay sidelined on Sunday due to a hamstring injury and with rumors starting to swirl around his name as the Oct. 29 trade deadline approaches, Matt Patricia said he's not "100 percent sure" whether Slay was in attendance for the game. Golden Tate, for what it's worth, said Slay was the one former teammate he didn't see before or after Detroit's 31-26 win.

It doesn't signal that Slay is on his way out, but it adds to the speculation that began Sunday afternoon when Adam Schefter reported the Lions "have gotten calls" about their Pro Bowl cornerback.

"It would take a lot to pry him out of Detroit," Schefter added. "But if there’s a CB-needy team out there, Slay will draw interest."

Here’s another name that bears watching as Tuesday’s trade deadline approaches: Lions’ CB Darius Slay, per league sources. Lions have gotten calls about Slay, though it would take a lot to pry him out of Detroit. But if there’s a CB-needy team out there, Slay will draw interest.

Intentionally or not, Slay basically placed himself on the market last week when, in the wake of the Quandre Diggs trade, he said he "personally wouldn't care" if he were to get traded, too. He later clarified he's not looking for a way out of Detroit, but by that point he had nudged the door open.

And now teams are starting to call. Given the value of elite corners in the NFL these days, don't expect the Lions to listen to any offers that don't include a first-round pick. They got a scary look at their defense without Slay on Sunday when they surrendered 322 yards and four touchdowns to rookie quarterback Daniel Jones.

A potential split between Slay and the Lions can be traced back to this summer, when the two sides were unable to agree on an extension. Slay skipped OTAs and minicamp, but the Lions didn't budge. He reported for training without a new deal, then watched Damon Harrison get an extension a few weeks later.

Slay's contract runs through next season.

Asked after Sunday's game if he wants to keep Slay beyond the trade deadline, Patricia echoed his comments from Friday and said, "Again, I want everybody. We just have to try to win and have to put everybody out there. I enjoy the team we have. I’m trying to coach them as hard as we can and we’ll go from there.

"I just want to give credit to the players that played in the game today, and just talk about the Giants. I think our guys battled really hard today.”

Patricia declined to comment on Slay's situation any further.

All things considered, it would be a surprise to see Slay on the move by Tuesday. The Lions pulled themselves back into the playoff race on Sunday, and they can't tap out early for the second season in a row under Patricia. They dealt Golden Tate at the trade deadline last year, then went 3-6 down the stretch. Trading Slay would invite something similar.

But the calls and the rumors will continue, and the Lions might think twice if the price is right.