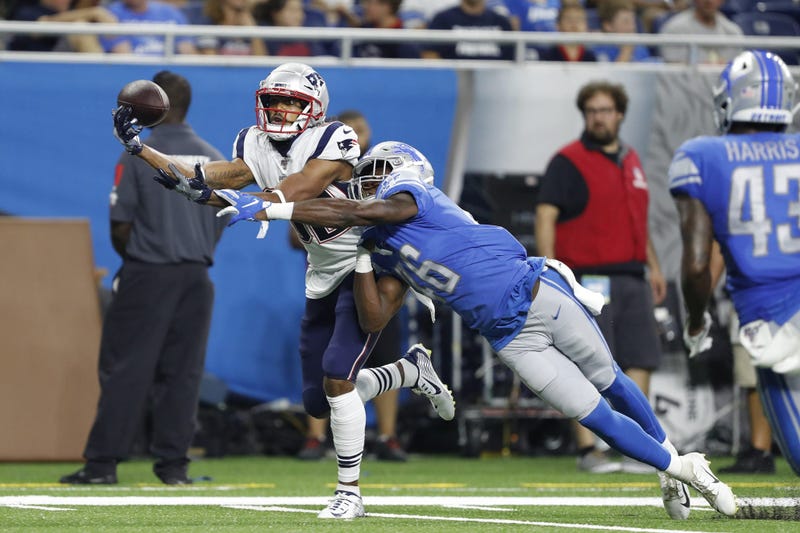 The Lions received solid production from their wide receivers in the first quarter of the season.

But as they begin their bye week, they're looking at reinforcements.

Detroit is working out receiver Maurice Harris on Tuesday, according to Mike Garafolo. The Lions got a good look at Harris when he came to Detroit with the Patriots for joint practices during training camp. Then he caught a touchdown against them in the preseason opener.

The Lions must have liked what they saw.

Harris, who spent the first three years of his career with the Redskins after going undrafted out of Cal, could have won a spot on the Patriots roster if not for a foot injury he suffered in the latter stages of camp. He was cut shortly thereafter.

Harris is healthy now, according to Garofolo, having gained clearance recently from a foot specialist.

The #Lions are working out WR Maurice Harris today, source says. Former #Redskins receiver had a strong camp with the #Patriots but was waived with an injury settlement after hurting his foot. Got cleared recently by foot/ankle specialist Robert Anderson.

The Lions had four different 100-yard receivers through their first three games, an NFL record. One of those receivers, Danny Amendola, was unable to play in Sunday's loss to the Chiefs due to a chest injury.

Amendola should be back soon, so Harris isn't necessarily a potential replacement. Per Garafolo, he's "just a guy they’ve been keeping an eye on." Plus, he's more of an outside target with his 6'3 frame.