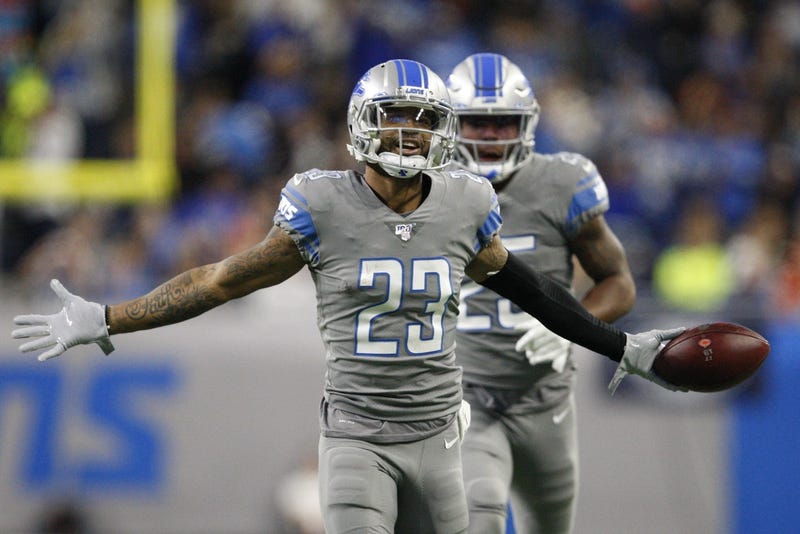 While Darius Slay remains on the trade block, the Lions continue to talk with his reps about a new deal. And it sounds like the two sides are starting to bridge the gap.

"We’ve had a lot of good talks really over the last year or so, including just recently in the last couple of weeks," Lions GM Bob Quinn told team reporter Tori Petry Friday. "All those conversations are good, but they’re private."
The three-time Pro Bowl cornerback wants a new contract before next season, somewhere in the neighborhood of $17 million per year. He skipped mandatory minicamp last offseason when he didn't get one, and this year likely won't be different.
That's why the Lions have been fielding trade offers for Slay, who leads the NFL in passes defended since 2014. He currently ranks 13th among cornerbacks in terms of average annual salary, and his base salary falls from $12.5 million to $10 million in 2020. He's set to be a free agent in 2021.
Over the last year, Slay has made it clear he'd like to stay with the Lions -- but he'll just as soon sign elsewhere for more money.

“If they give me a contract, I’ll be blessed and fortunate enough for it," he said at the Super Bowl last month. "Like I said, I always wanted to retire as a Detroit Lion, but if it don’t happen, it’s cool. I’ll be alright. If I don’t, someone will be getting a great player."

Elsewhere on the trade front, Quinn again shot down the notion that the Lions are shopping Matthew Stafford. It was reported last week the team is trying to trade its franchise quarterback, which prompted Quinn to set the record straight.

"He’s here, he’s our quarterback," Quinn said Friday. "All those rumors, not sure where they came from, but like I said before, they were 100 percent false."

Other highlights from Quinn's interview:

On the possibility of pre-draft trades: "Open to any trades. Those are conversations that generally the higher you’re up in the draft, the sooner the conversations begin. I have not had any trade conversations with anybody as of yet. Those tend to start in the hallways of the combine that we kind of roll through (next week). We’ll see how that goes."
On contract talks with their current free agents: "We are talking to a lot of agents of our current guys. I think there’s a little bit of a stall just because of the uncertainty of the CBA. If there's a new CBA, a lot of things can change in terms of how you structure things ... I think we’re having good conversations. Nothing's really passed the finish line, but we’re hoping to get a few things done here in the next week or so."
On the appeal of new defensive coordinator Cory Undlin: "I got to know Corey at New England for one season, kind of kept in touch over the years. Really good blend of systems that he’s been in in the past, so it’s not just the system that we’re running. He has some other things that he likes to do that I think over the course of the spring Coach (Patricia) and him will kind of blend that together to make improvements to our defense. But he's a great communicator. The players love playing for this guy. He’s personable, he’s fiery and I’m excited to have him here."
On the importance of finding first-year contributors in the draft: "Extremely important. Obviously every year you want to get guys that contribute initially and quickly. I think last year we were able to get TJ (Hockenson) in and he had a good start to the season and a good rookie season until he got hurt. Jahlani (Tavai) and other guys, Will Harris played well, right on down the line. As rookies, you want to get guys that can contribute early and often. ... This year, with the picks that we have, hopefully we get a couple of guys that can come in right away and really help our team."