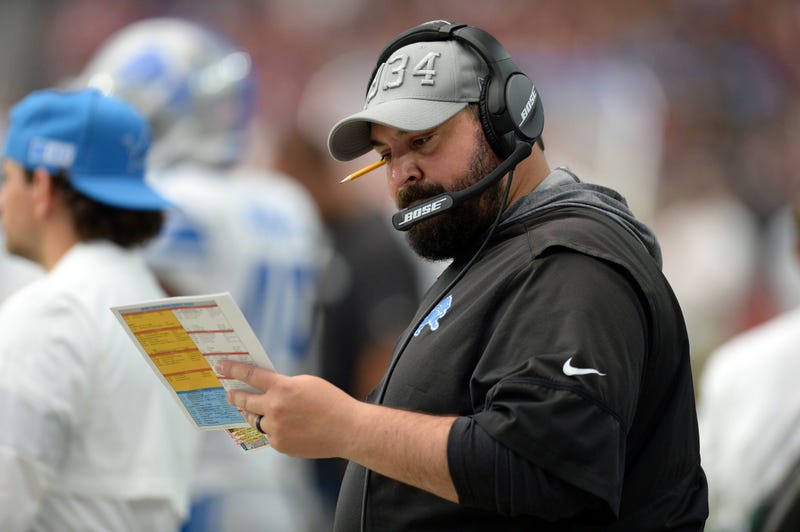 Matthew Stafford's reaction on the sideline said it all.

After the Lions coaching staff called a last-second timeout that negated a first down that would have clinched a 24-16 win over the Cardinals on Sunday, Stafford ripped off his helmet and shouted in the direction of Matt Patricia, "Trust me! Trust me!"

On third-and-5 near midfield with a little over two minutes left and the Cardinals out of timeouts, Stafford beat a dwindling play clock and then threw a swing pass to running back J.D. McKissic for an easy first down. But the referees blew the play dead just prior to the snap, giving the Cardinals second life.

Television cameras showed offensive coordinator Darrell Bevell signaling for the timeout, but Patricia, who was standing on crutches further back from the sideline, said it was his decision.

"I’m calling the timeouts," he said. "We’re looking at the play clock trying to get that stuff down and get it figured out at that point. Stafford did a great job of getting it off, but really, whether (the play clock) was at 0 or 1, either way, the mechanics, the way that works with the officials, the guy back there, he’s staring at the play clock and he sees it. We’d rather be in third-and-5 than third-and-10 (due to a delay-of-game penalty) in that got-to-have-it situation.

"We’ve just got to go out and execute the next play."

The next play was a poorly-designed pass in which all four of Stafford's receivers ran fly routes toward the end zone. Stafford, quickly under pressure after the snap, heaved a no-chance pass to Kenny Golladay that fell incomplete.

The Cardinals blocked Sam Martin's ensuing punt, took over at their own 40 and then rookie Kyler Murray led a nine-play touchdown drive, punctuated by a two-point conversion pass, to knot the game at 24 with about 45 seconds left. The teams traded field goals in overtime.

In his 11th NFL season, it's understandable why Stafford would want control over the offense in such a critical moment. But the veteran's never one to point fingers. He took accountability afterward for letting the play clock approach the danger zone.

"I thought we got it off," he added, "but I understand the decision."

Stafford helped stake the Lions to a 24-6 fourth-quarter lead before the defense backed off and allowed Arizona back in the game. He finished 27-45 for 385 yards and three touchdowns, one of the best season-openers of his career. It was good enough for a victory, until it wasn't.