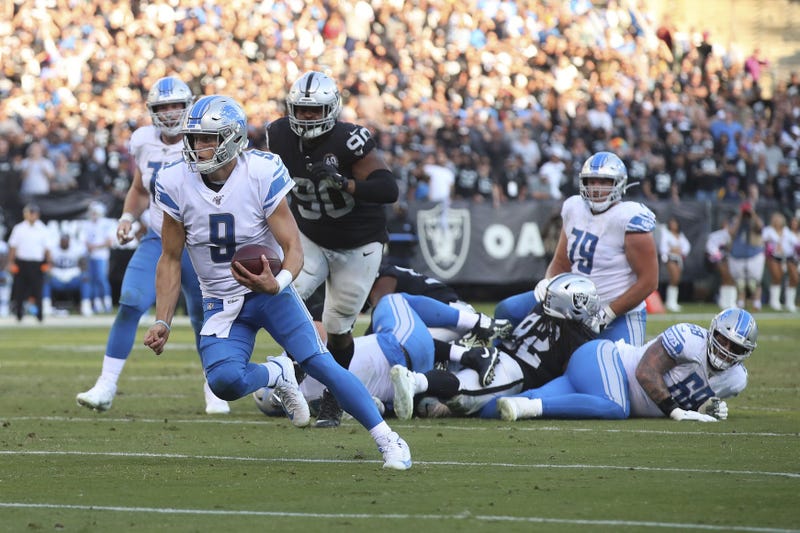 Last year it was his back. Last month it was his hip. Now it's his back again, with a virus wedged in between.

Matthew Stafford was limited at practice on Wednesday due to a back injury he apparently suffered in Detroit's loss to the Raiders. Per usual, he said it won't be a concern on Sunday, when the Lions visit the Bears desperate for a win.

Asked if his latest issue is related to the hip problem he's dealt with for much of the season, Stafford said, "No, I’m fine. I’ll be good to go. I’m not really worried about it. Something different, but I’m totally good.”
Asked if it's related to his injury last season, when he reportedly played through a broken back, Stafford said, "No, I’m good."
And as for the sickness that left him without a voice last week, Stafford, his voice still hoarse, said, “I mean, it’s way better. I’m fine, just a little sick, but so is everybody in Michigan right now.”

Make no mistake, Stafford will be on the field Sunday in Chicago for his 137th consecutive start, the second longest streak among active quarterbacks. He's in the midst of the best season of his career, pacing the NFL with 312.4 yards per game. He ranks second with 19 touchdowns and fifth with a passer rating of 106.0.

The Lions, despite struggling to run the ball throughout the season, rank fifth in the NFL in total offense, and their quarterback is the main reason why.

The arrival of offensive coordinator Darrell Bevell has helped, too. He's utilizing Stafford's ability to throw the deep ball, and Stafford is averaging a career-best 8.6 yards per attempt. He leads the NFL in passes of at least 20 yards (41) and ranks fourth in passes of at least 40 yards (8).

"I think our guys are doing a good job of getting behind people and winning downfield, which is giving me confidence to cut it loose to them," he said. "Obviously when the ball is in