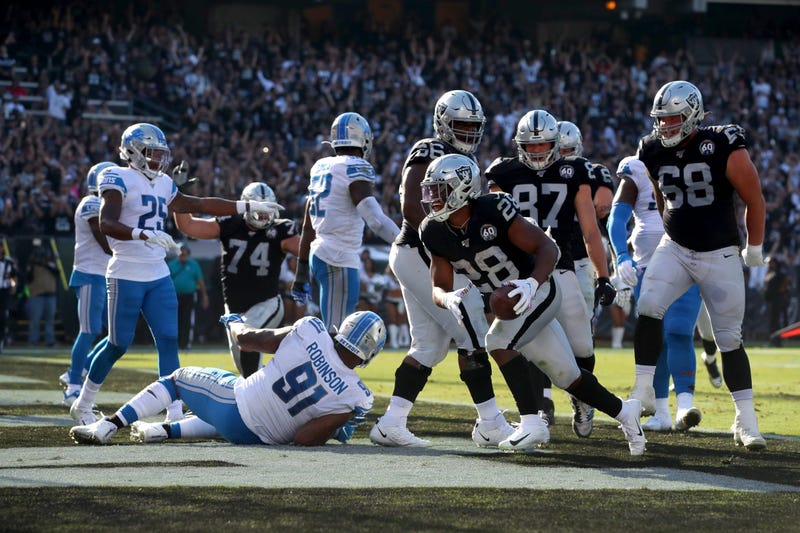 The Lions defense continues to outdo itself.

Two weeks after giving up over 500 yards to the Vikings, a week after allowing four touchdowns to a rookie quarterback, the Lions melted down in the fourth quarter Sunday in a 31-24 loss to the Raiders.

Detroit's defense, the purported strength of this team at the outset of the season, and the supposed area of expertise of head coach Matt Patricia, is one of the worst in the NFL. What's the biggest problem?

"The whole thing," said cornerback Darius Slay. "All of us. There’s 11 of us out there, so there’s 11 problems. We have to fix it, as a group, as us, we have to figure out a way. All of us in here that play on defense know that we have to stop them, and we ain't doing that right now.”

Yet again, the Lions were gashed on Sunday by the run. The Raiders, led by rookie Josh Jacobs, rushed for 171 yards, the seventh time in eight games this season Detroit has ceded over 100 yards on the ground. The defense seemed to take a step forward in this department last week, but the improvement was short-lived.

It's fairly baffling given the personnel up front, the same personnel that defended the run so well in the second half of last season. Across the board, the defense has regressed.

That would fall on Patricia and his chosen defensive coordinator Paul Pasqualoni. The duo produced a unit that finished 10th in the NFL last season, but clearly, offenses have figured them out. And the Lions have failed to adjust in response.

Slay said the defense has been getting beat on the same plays since Week 1.

"There’s a scheme with it, because all coaches game plan, but right now it’s not even scheme. We get the same (looks) every week, it’s not even different. I don’t even think they (opposing offenses) be calling their own plays. Whoever started this first, they just started copying it from the jump," said Slay. "That’s all it is. This league is a copycat league, and they see we have a problem with all that, they do the same thing.

"Everybody in the world knows we play this, so they run this, and they do it all the time. We ain’t seeing nothing new, ain’t no new plays designed up, it’s the same ones we’ve been having problems with since probably the first week of the season. We just have to fix it."

Prior to the fourth quarter Sunday, the Lions failed to force a punt. And when they really needed one with the score tied at 24 and about five minutes remaining, they gave up a 75-yard touchdown drive. They've allowed more points per game in the fourth quarter (10.5) this season than any team in the NFL.

Patricia, per routine, bore the blame for the loss.

“It’s going to start with me," he said. "I am going to go back to it and see what I can do better. How I can teach it better and how I can coach it better. Again, it doesn’t really matter what I know, it matters what the players know and how they play out on the field. Obviously I have got to get that across to them better.”