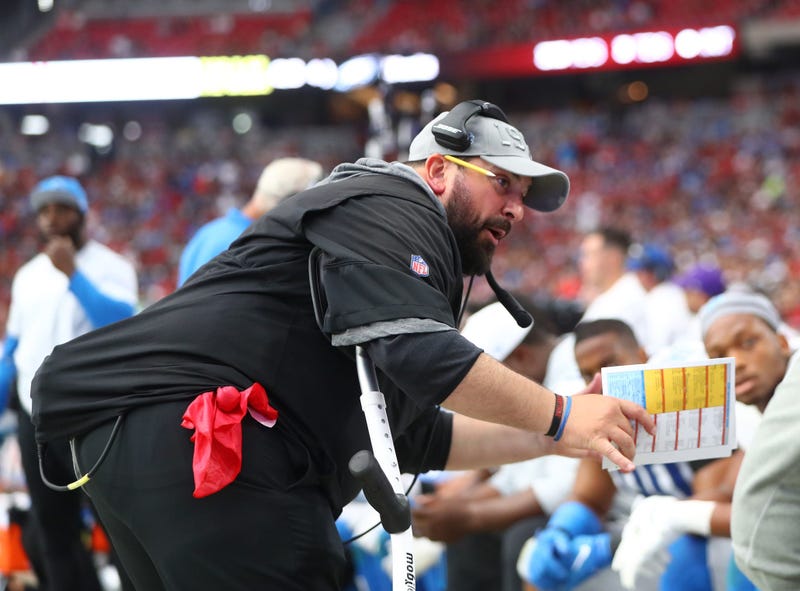 Once the Lions built a 24-6 fourth-quarter lead over the Cardinals on Sunday, it certainly looked like they took their foot off the gas.

They got careful on offense and conservative on defense, and Arizona roared back into the game. Their lack of aggression down the stretch cost them a victory in Week 1.

"We definitely didn’t back off from the standpoint of play calls or anything like that. Not at all," he said on Monday.

The Lions' offense was most effective throwing the ball through the first three quarters. Leading by three scores in the fourth, they naturally went to the ground. Up 24-9, they called two runs, one pass, and punted. Up 24-16 on their next drive, they called six runs, two passes, and punted.

Were it not for that ill-fated timeout, this approach would have worked.

Detroit's more obvious gaffe was deciding to play it safe on defense after flustering Kyle Murray and the Cardinals for most of the game. They appeared to scale back the pressure and go into prevent mode in the fourth quarter, and the result was three straight scoring drives for Arizona.

The Cardinals went 58 yards in 10 plays for a field goal, 70 yards in seven plays for a touchdown, then 60 yards in nine plays for the touchdown that tied the score. They averaged 7.2 yards per play over this stretch, after averaging just 2.2 before that.

By letting Murray get comfortable, the Lions let the Cardinals back in the game. But Patricia said it was Arizona's offense that adjusted, not Detroit's defense.

"We know how dangerous he is," said Patricia. "He's obviously a great player and he finished off the game really well last night. From that standpoint, they made some good adjustments. We tried to adjust and match some things they did. Give credit to them. Give credit to Larry Fitzgerald, he’s a Hall of Fame player for a reason. He made some pretty amazing plays and catches. That’s what he does, and certainly that got them going a little bit and gave them some great field position to take advantage of.

"But really for us, it’s just coaching and execution. That’s the bottom line with it. All of that has to be better in the fourth quarter."

Murray said afterward he sensed Detroit's defense got tired late in the game, spurring the Cardinals' comeback. The Lions did appear to wilt under the pressure of Arizona's up-tempo offense, and Patricia acknowledged Monday the high volume of snaps might have caught up to them.

But Patricia isn't worried that conditioning, something he's emphasized since he took over as head coach, might be an issue for his team.

"Conditioning for us is something that we build and we go through. There were some good guys out there in really good shape, running around and playing fast all the way through, and some guys that still need to work on some of their conditioning and reps," he said. "All of that factors into the early part of the NFL.

"We got caught in a situation last night where both sides of the ball played a lot of snaps, probably a lot more than what most teams did this week. For us, we're going to continue to work on it. I think for the most part, a lot of the guys out there were in really good shape and running around and pushing through. But it’s a lot of snaps. We have to cut down on the amount of snaps."