Baker Mayfield is done with social media for the foreseeable future. The Browns quarterback announced on his Instagram late Tuesday night that he will be using his time off social media to focus on himself, his family and his loved ones.

Mayfield possibly gave us a hint of what was coming, taking to social media to tell his followers that he enjoyed the football on Sunday, and following that tweet up by saying the world is a 'toxic' place and he is ready to tighten up his inner circle and focus on his family and loved ones as the offseason progresses. However, less than an hour later, Mayfield liked a tweet that was criticizing the quarterback--something he does for motivation.

Mayfield made his stance very clear on his Instagram Tuesday night.

“Getting off all social media for the foreseeable future,” Mayfield wrote.

While this would've best served the Cleveland quarterback during the regular season, taking the LeBron James approach and going 'Zero Dark Thirty' may be for the best.

In fact, Mayfield's wife Emily claimed her husband was receiving death threats on social media after Week 16's loss to the Packers.

“I’m still a believer that there’s more good people out there than bad, but WOW does social media make me think otherwise sometimes,” Mayfield said. “Which plays into why I love to spread positivity. Our world needs more of it."

“The death threats, lies being told about my husband, and blatant DISRESPECT never ceases to amaze me. For the record — I pray for those of you who even think those thoughts, let alone type them out. I hope you can find some happiness so you stop trying to steal it from others.”

Baker downplayed the messages, calling the harassers 'keyboard warriors' and saying the threats they were making are empty. 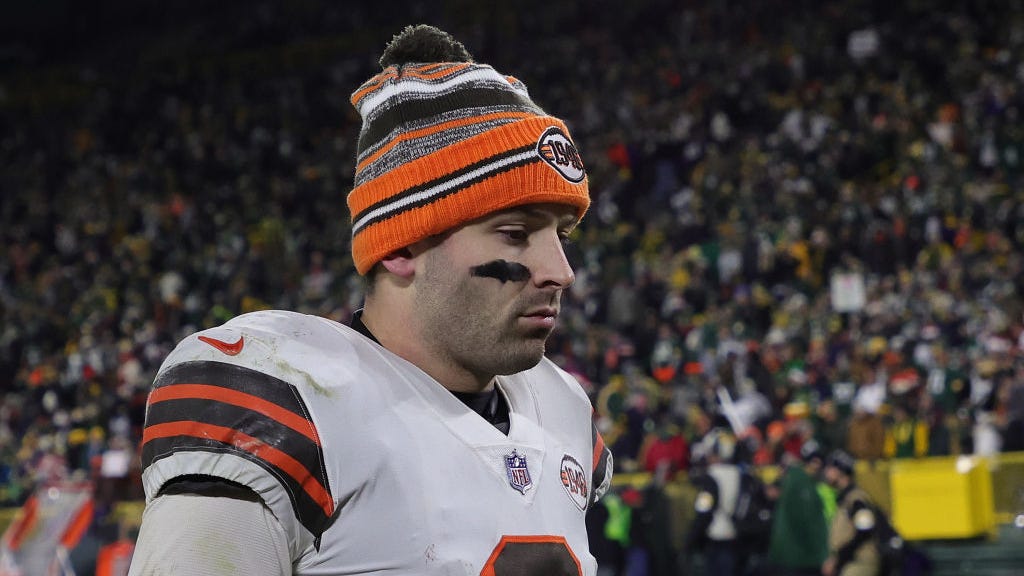 The news comes just two weeks after the end of a trying season for the former No. 1 overall pick. Mayfield battled shoulder injuries since Week 2 and posted the worst stat line of his career. Mayfield underwent surgery on his non-throwing shoulder last week after dealing with a torn labrum for much of the 2021 season. After undergoing successful surgery, Mayfield released a video to update everyone on his status.

Thanks to Dr. Limpisvasti and his team for performing a successful surgery. This is only going to be a minor bump in the road.. excited to get healthy and back to my normal self. Thank y’all and God Bless. pic.twitter.com/cRVdkB6t9d

Browns GM Andrew Berry said they expect Mayfield to be 'full-go' come training camp in July, and expects him to be their starter in 2022.

Since being drafted No. 1 overall in 2018, Mayfield has engaged numerous social media feuds with members of the local and national media, including Fox Sports’ Colin Cowherd and ESPN’s Rex Ryan.