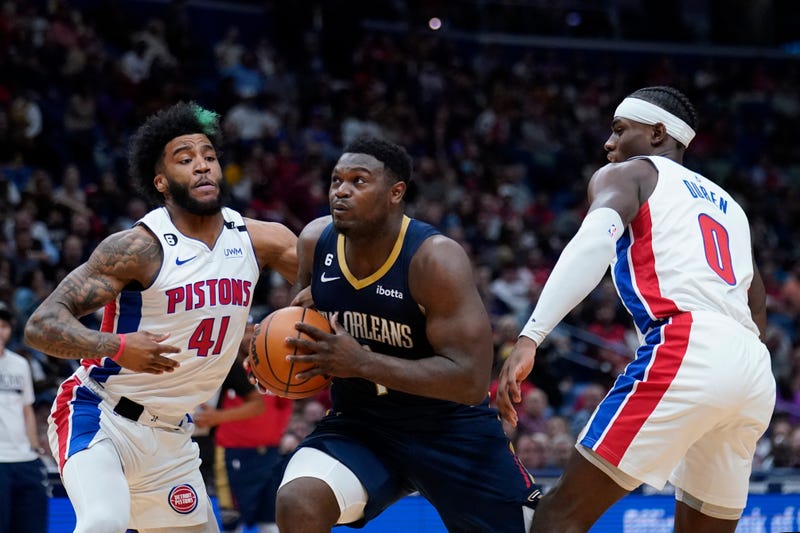 NEW ORLEANS (AP) — When Detroit guard Corey Joseph tried to bear-hug Zion Williamson to prevent an easy transition layup, the New Orleans Pelicans’ imposing star forward found a way to toss the ball in anyway as he was falling to the court.

After Williamson pulled himself up, he faced his teammates on the bench and bent over holding one hand, palm down, above the hardwood — the “too small” gesture.

“It was just one of those fouls where you try to make the person hit the free throws — and I made the shot,” Williamson said with a wide smile.

Williamson had 29 points and 10 rebounds, and New Orleans held off the Pistons 104-98 on Wednesday night for their fifth straight victory.

Williamson wasn't shy about getting teammates and the crowd fired up, be it with his bicep flexing after big shots, or dapping a fan in the front row after one of several layups he made while being fouled.

“Sometimes I just do it to get my teammates going or just get the crowd into it," Williamson said. "All those energy moments, they play a part later in the game.”

Trey Murphy III, a 2021 first-round draft choice starting because of Brandon Ingram's left foot injury, hit four 3s and finished with 20 points for New Orleans, which won for the 10th time in 12 games.

Jonas Valanciunas had 14 points and 12 rebounds for New Orleans. Naji Marshall added 17 points, including a put-back that made it 100-94 with 29 seconds left.

Saddiq Bey, who scored 25 points for Detroit, responded with a long jump shot that he intended to be from 3, but a replay review showed his foot slightly on the 3-point line, leaving the score at 100-96.

CJ McCollum and Murphy each hit free two throws in the last 18 seconds to help seal the victory.

“We had to win ugly,” Pelicans coach Willie Green said. “When it’s all said and done, we know we can get to the paint, go finish or get to the free-throw line.”

Williamson, who has averaged 28 points during Ingram's five-game absence, dominated inside. His highlights included a spinning dribble drive in the paint as he was fouled; a driving, double-pump floater from the lane; and a one-handed alley-oop jam as he appeared to hang in the air awaiting Murphy's lob.

The Pistons tried to be physical with Williamson, knocking or pulling him to the floor more than once.

Marshall was assessed a technical foul for sticking up for Williamson, but drew praise from his team for stopping short of getting ejected and then proceeding to be productive on both ends.

“We got to have each other’s backs,” Green said, adding that his players “understand the importance of taking up for a teammate, but maintaining your composure and staying in the game.”

By contrast, Pistons leading scorer Bojan Bogdanovic was ejected with 9:13 left in the third quarter for something he apparently said to official Karl Lane.

“You can’t get ejected,” Pistons coach Dwane Casey said. “He felt bad about it, but we've got to have him down the stretch because he is our go-to guy. ... He's a veteran and he knows better.”

Detroit trailed 61-45 at the time, but looked motivated by what could have been a demoralizing development.

Bey and Jaden Ivey combined for 19 points during the last half of the period, and Burks' 3 cut New Orleans' lead to 77-73.

Ivey finished with 12 points. Killian Hayes had 17 points and 11 assists for the Pistons, and Jalen Duren had 12 points and 13 rebounds.

Pelicans: Guard Jose Alvarado left the game in the third quarter with bruised ribs after running hard into a screen set by Stewart. “Thank God he was OK; nothing serious from what I was told," Green said. "He’s having such a great season. We don’t want anything to derail that.” ... New Orleans scored 62 points in the paint.