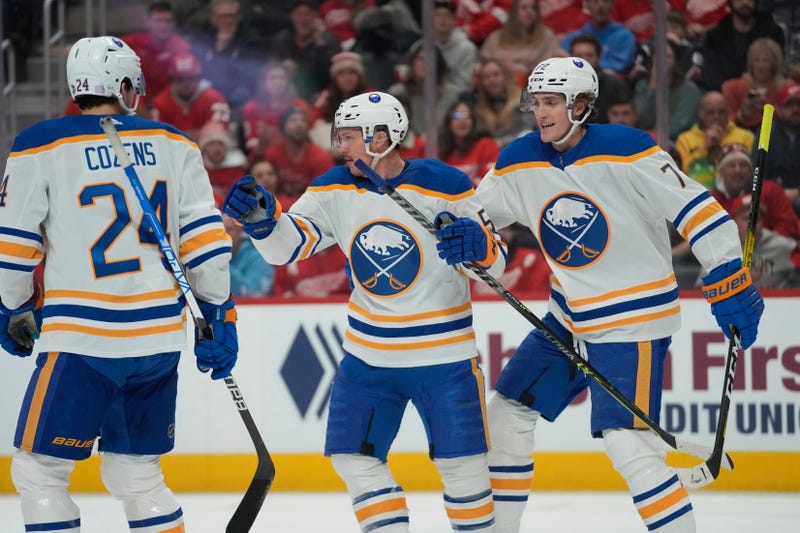 DETROIT (AP) — Jack Quinn scored the only goal in a shootout, Dylan Cozens had the second two-goal game of his career and the Buffalo Sabres held off the Detroit Red Wings 5-4 on Wednesday night.

Mattias Samuelsson got his first career goal for the Sabres, who squandered a three-goal lead in the third period. Jeff Skinner supplied his sixth goal in five games on a power play, while Craig Anderson made 40 saves and collected an assist. Rasmus Dahlin added two assists.

“That was definitely a rollercoaster game there at the end,” Samuelsson said.

Buffalo went through a similar situation Monday against Tampa Bay and didn't come away happy. The Sabres gave away a two-goal lead in the final six minutes of regulation, then lost in overtime.

After blowing a 4-1 lead versus the Red Wings, the Sabres had to kill off three penalties in the final six minutes of the third period, including a 5-on-3 for 1:27.

Detroit was 0 for 7 on the power play.

“Every single team is going to lose leads in the third period,” Buffalo coach Don Granato said. “We’re going to have to learn from it, in a sense, but the other team is always surging. The number of penalty kills was tough tonight, but overall it’s going to happen. I like the response. We went through it the other night and we were better under the pressure tonight.”

“Just great push from the boys. A little maturity knowing they were playing fine, it’s just not going in for us,” Red Wings coach Derek Lalonde said. "We stuck with it and got a really good point.”

Buffalo led 2-1 after the first period.

Berggren scored his second career goal off a pass from Filip Hronek, beating Anderson on the stick side.

Cozens knotted the score with a short-handed goal. Anderson whipped the puck from behind the the net around the boards and toward center ice. Cozens gathered it and got behind the defense.

Samuelsson's first goal in 64 career games was a shot from the right side that bounced off Nedeljkovic's arm and into the net.

“It’s something you dream of as a little kid,” Samuelsson said. “So to see it go in, I was pretty shocked and just happy. Skating by the bench and seeing all the guys happy for you, it’s a good moment.”

Skinner scored just more than two minutes later on a wraparound move with Detroit defenseman and last season's NHL Rookie of the Year Moritz Seider down on the ice. Seider, hit in the leg by Tage Thompson's shot, returned to action later in the period.

Perron made it 4-2 early in the third and Sundqvist scored in front off Andrew Copp's pass at 10:41.

Sundqvist tied it at 12:31 with a shot from the left circle after Copp won a faceoff.

“I don’t know about happy, but satisfied with the way we came back,” Copp said. “From 4-1 down it’s a good sign. But it still (stinks) right now that we didn’t get the next point. We had a couple of chances to put it away.”

Buffalo was relieved to get the two points.

“There’s a lot we can learn from these last two games,” Cozens said. “We can’t let the crowd get behind them like that. They gain so much momentum from that.”

NOTES: The Sabres are 6-1-4 against the Red Wings over the past 11 meetings. ... Anderson, whose NHL career began during the 2002-03 season, has 20 career assists. ... Perron has 21 points in 21 career games against Buffalo. ... Cozens' first multigoal game came against Edmonton last November.