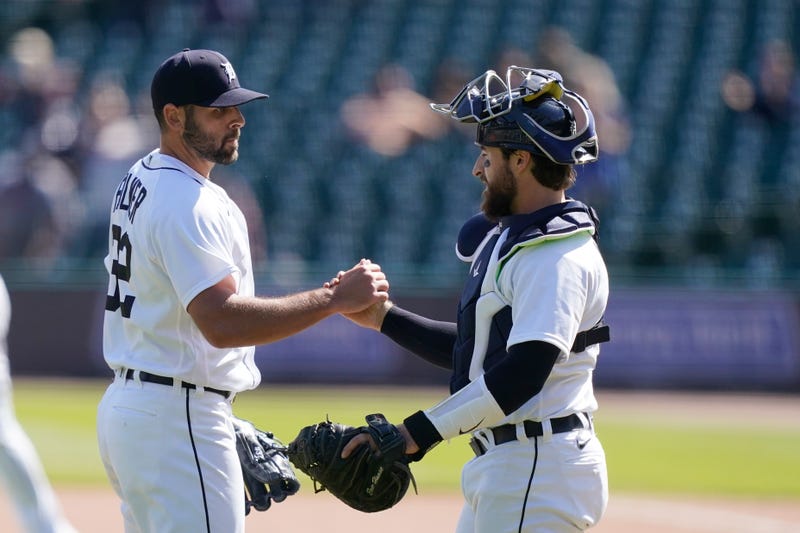 DETROIT (AP) — Michael Fulmer shut down Kansas City's ninth-inning rally for his second save, and the Detroit Tigers' 4-3 win Thursday to extend the Royals' losing streak to 11 games.

Detroit led 4-1 entering the ninth, but Kansas City scored twice of Gregory Soto on a groundout by Carlos Santana and an RBI single from Salvador Perez.

Fulmer relieved Soto and got a popout from Jorge Soler and struck out Andrew Benintendi swinging to end it.

The Royals led the AL Central at the start of this skid but are now 16-20.

Spencer Turnbull (2-2) allowed a run and six hits over 6 1/3 innings for Detroit. He walked one, struck out seven and hit a batter as the Tigers rounded out a three-game sweep.

Daniel Lynch (0-2) allowed four runs, three earned, in the second inning and was pulled with two outs in the third.

Turnbull departed after Nicky Lopez’s one-out single in the seventh. Alex Lange took over and got Whit Merrifield to bounce into a forceout. Lange then walked Santana to bring the tying run to the plate, but Salvador Perez bounced into a fielder’s choice to end the inning.

The Royals once again brought the tying run to the plate with one out in the eighth, but Jose Cisnero fanned Hunter Dozier and Michael A. Taylor.

The Tigers scored all of their runs in the second on RBI singles by Willi Castro, Jacoby Jones and Robbie Grossman and a sacrifice fly by Akil Baddoo.

The Royals made it 4-1 in the fifth on Merrifield’s double-play grounder.

Kansas City threatened with runners on first and third and one out in the sixth, but Turnbull struck out Ryan O’Hearn and got Hunter Dozier on a groundout.

Eric Haase started at catcher for Detroit one day after being recalled from Toledo. Both catchers who started the season for the Tigers, Wilson Ramos (lumbar spine strain) and Grayson Greiner (left hamstring sprain), are on the injured list.

Royals: Play a doubleheader Friday against at the Chicago White Sox. RHP Brad Keller (2-4, 7.31) is expected to start the opener.