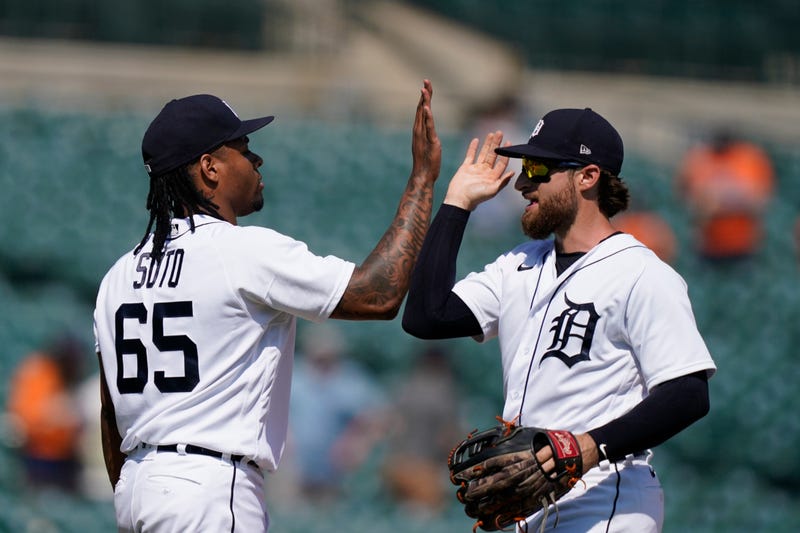 DETROIT (AP) — Jonathan Schoop homered and Isaac Paredes hit a go-ahead single as the Detroit Tigers rallied from a first-inning deficit and took advantage of three errors to beat the Seattle Mariners 8-3 Thursday.

Mitch Haniger put Seattle ahead against Tyler Alexander with the first of his two solo homers, but the Tigers rallied to take two of three from the Mariners, who have lost six of nine following a five-game winning streak.

Joe Jiménez (1-0) pitched a 1-2-3 seventh for his first win since last Aug. 26. Alex Lange threw the eighth and Gregory Soto pitched a perfect ninth to finish the six-hitter.

In a planned bullpen game, Alexander allowed one run and three hits in 2 2/3 innings and relievers allowed three hits over the rest of the game.

Seattle's Justus Sheffield gave up five runs — three earned — and six hits in four innings, the shortest of his 11 starts this season.

Ty France was hit by a pitch in the fifth inning from Jason Foley, becoming the first player in Mariners history to be hit by pitches four times in a three-game span. Foley, a 25-year-old right-hander, made his first Comerica Field appearance, four days after his major league debut.

Jake Rogers homered in the third but Jake Bauers, making his Mariners debut after he was acquired from Cleveland, had an RBI grounder that cut the lead to 3-2 in the fourth.

Haniger's 16th homer closed the gap in the sixth against Foley and gave him his fourth multihomer game this season. Grossman hit a two-run homer in the bottom half, his eighth home run this season.

Rogers tripled home a run in the seventh.

Following injuries to 1B Evan White and OF Kyle Lewis, the Mariners acquired Bauers for a player to be named or cash. Bauers went 1 for 4. ... 2B Jack Mayfield was designated for assignment.

Tigers RHP Rony Garcia sprained a knee during pregame warmups. He required assistance from the team training staff to make it off the field and was placed on the 10-day injured list. RHP Beau Burrows was recalled from Triple-A Toledo along with Lange and OF Daz Cameron. OF Derek Hill and LHP Derek Holland also were put on the 10-day IL.