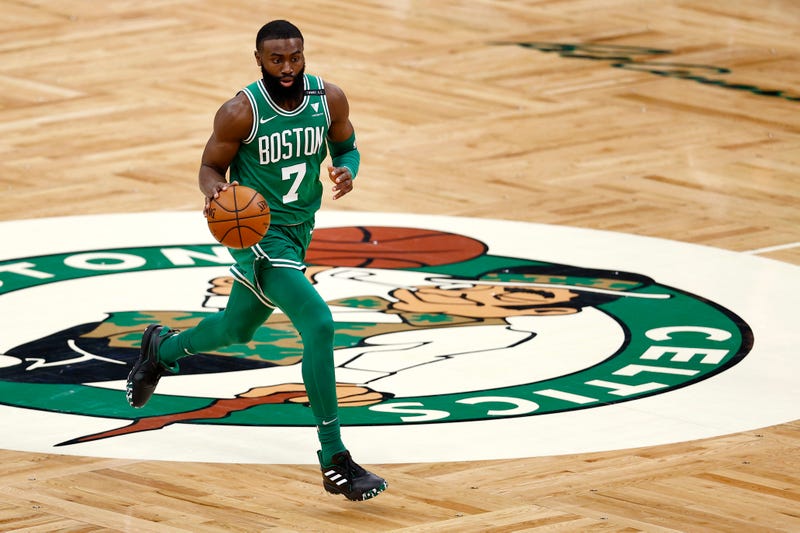 The retooling Boston Celtics, which recently promoted Brad Stevens from head coach to president of basketball operations, haven't hinted at the possibility of trading away All-Star guard-forward Jaylen Brown this offseason.

And former NBA player and current ESPN analyst Ryan Hollins -- conflicted by the situation -- believes it's best to maintain the status quo, as parting ways with the 24-year-old Brown could come back to haunt the Celtics.

"Jaylen Brown scares me, because I think if he goes, Jaylen Brown is going to have a James Harden-like explosion," Hollins told The Zach Gelb Show on Wednesday. "And I don't think that he's ever going to have that under [star teammate] Jayson Tatum. He can shoot, he can score. He can sink his hips into his crossovers, which means he moves as if he's a guy who's 5-foot-10, 5-foot-11. He's got that type of mobility. And I think he could have a James Harden-like explosion, and it just may not happen with the Celtics.

"But who'd I trade him for? The only person comparable -- but unfortunately he's older -- that I would even consider is possibly a Paul George. So, I just don't see it, ultimately. If I'm letting him go, there was something really, really, really good... This better be a darn sweet deal for me to move on from him. Otherwise, I'm going to hold onto him. But I just don't think that Tatum and Brown are going to be the best fit. I think Brown is a star on another team and in another organization."

Brown, who underwent season-ending left wrist surgery in early May, averaged a career-high 24.7 points on 48-percent shooting with 3.4 assists this season. He also scored at least 22 points in 40 of his 58 games, and back on Dec. 30 against the Memphis Grizzlies, Brown became the first Celtics player to score 40-plus points while playing less than 30 minutes in a game since Larry Bird in 1986.

The Celtics fell short of expectations as the East's seventh seed this season, and ultimately lost their first-round playoff series against the Brooklyn Nets.

The entire NBA conversation between Hollins and Gelb can be accessed in the audio player above.