Former NFL quarterback and current NBC analyst Chris Simms has often referred to Green Bay quarterback Aaron Rodgers as "the best I've ever seen" in terms of quarterback play. However, Simms says that Rodgers - the reigning league MVP - is his No. 3 quarterback for the 2021 season.

Kansas City Chiefs quarterback Patrick Mahomes is No. 1, which isn't especially surprising. However, Simms also has Josh Allen of the Buffalo Bills above Rodgers, which is a mild surprise. Simms spoke about how "surgical" Rodgers is, and acknowledged that he still believes that Rodgers is the more accurate of the two. But in the end, he gave the edge to Allen.

"...It's not enough to overcome all the m************ plays that Josh Allen makes," Simms said on the most recent episode of his podcast. "It's unbelievable. When you go back and watch it, you certainly can argue that Josh Allen was the MVP of football last year. Again, a team with no running system, he was second on their team in rushing. You gotta add his eight touchdown rushes to the mix too. It's a big part of what they do - when they get to the six, seven-yard line, they ask Josh Allen to score touchdowns running the ball. And, he made more game-changing, game-saving, unbelievable plays than maybe anybody in football last year. And that's why he got the ranking."

The No. 7 overall pick in the 2018 NFL Draft, the Bills very much managed Allen through his first two seasons. However, in year three they took the training wheels off, and Allen exploded. Allen threw for 4,544 yards, along with 37 touchdowns to 10 interceptions. His completion percentage rose from 52.8% in his rookie season to 69.2% in his third year. And as Simms mentioned, Allen is a force on the ground, having rushed for at least eight touchdowns in each of his first three campaigns in Buffalo.

While Rodgers' future in Green Bay is wholly uncertain, Allen returns to a team in Buffalo that he helped to reach the AFC Championship Game a season ago. Rather inexplicably, offensive coordinator Brian Daboll didn't get a head coaching job after the 2020 season, so he'll return to lead an offensive headlined by Allen and All-Pro wide receiver Stefon Diggs. 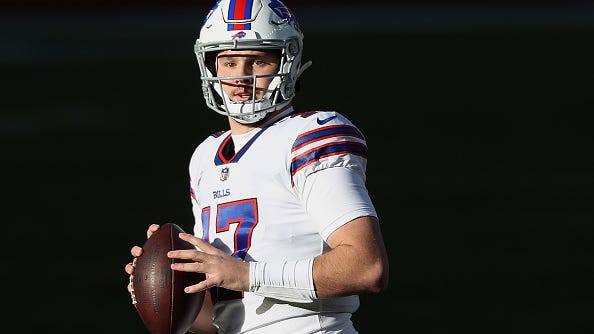