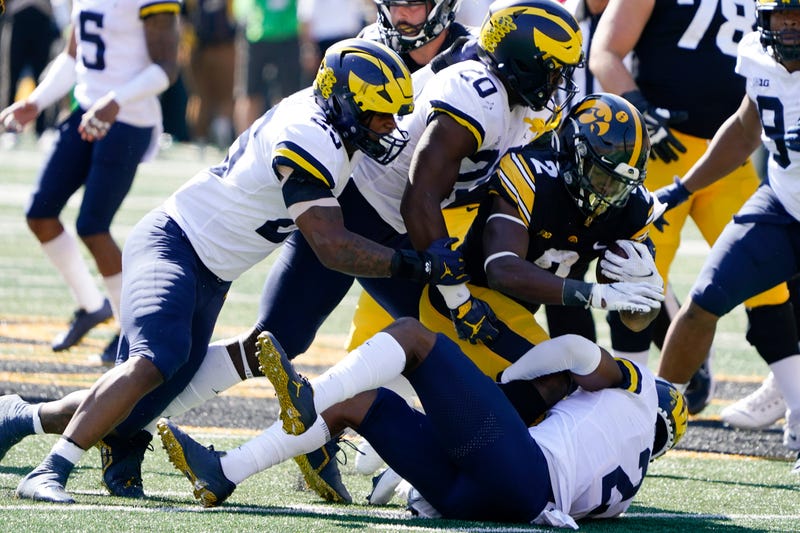 The Wolverines (5-0, 2-0 Big Ten Conference) were able to consistently move the ball against the Hawkeyes (3-2, 1-1), who came into the game leading the nation in scoring defense and ranked sixth in total defense and rushing defense. Michigan had 327 yards, including 172 rushing yards.

Bell's run finished an 11-play, 75-yard drive that took more than five minutes off the clock.

“That's how you start a game,” Michigan coach Jim Harbaugh said. "It was an impressive drive, and the game was impressive all around.”

“Right from the get-go, I knew we had the jump on them,” said tight end Luke Schoonmaker.

“They did a good job of setting the tone, making it very difficult for us,” Iowa coach Kirk Ferentz said.

Corum’s 20-yard touchdown run with 1:19 left in the game closed the scoring for the Wolverines.

It was the sixth 100-yard rushing game of Corum’s career. Corum, who had 29 carries, was coming off a career-high 243 yards in last weekend's 34-27 victory over Maryland.

Michigan ran 66 plays, gaining an average of five yards per play. But the longest running play of the game was Corum's touchdown run.

“I thought we did a good job of (patience),” Harbaugh said. “I thought we were just moving them off the ball really well.”

“Yeah, maybe we didn't get the big ones,” Schoonmaker said. “But we added up the little ones, and it turned into something great. With that defense, we're going to have to fight for every yard. We just had to execute.”

“We've got good backs, a good quarterback,” Michigan offensive lineman Trevor Keegan said. “We were playing with a lot of confidence today.”

Michigan continued its defensive mastery of the Hawkeyes, who have scored just 20 points combined in the last three games against the Wolverines.

Iowa didn't score until Kaleb Johnson’s 2-yard touchdown run to start the fourth quarter, cutting the Michigan lead to 20-7. The Hawkeyes got to the Michigan 6 on their next possession, but Spencer Petras’ pass to Sam LaPorta went for only 1 yard on fourth-and-2.

Petras, who finished with 246 passing yards, threw a 5-yard touchdown pass to Luke Lachey with eight seconds left in the game for Iowa's final points.

Michigan had lost its last four games at Iowa. The last time the Wolverines won in Iowa City was in 2005, when they won 23-20 in overtime.

“We keep track of these things,” Harbaugh said.

The Wolverines should maintain their spot in the rankings after an impressive road win against one of the nation’s best defenses. Iowa had won five of its last six home games against top-five teams, but Michigan had no problem with the Hawkeyes, who didn’t provide a challenge until the fourth quarter.

Michigan: McCarthy, who completed 18 of 24 passes, was steady in his first road start, rarely challenged by an Iowa defense that had been opportunistic with turnovers the last two weeks. “When it's all said and done, it's just, 'Do you, J.J.," Harbaugh said. "

Iowa: The Hawkeyes' offense, which showed some life in wins over Nevada and Rutgers in the last two weeks, made too many mistakes. One first-half possession into Michigan territory ended with three consecutive overthrows by Petras, and another drive was stalled by a holding penalty that negated a 17-yard run by Johnson. “As crazy as it sounds, from where I stood, I thought our guys played hard and I saw some growth,” Ferentz said.

Michigan: At Indiana next Saturday.

Iowa: At Illinois next Saturday.