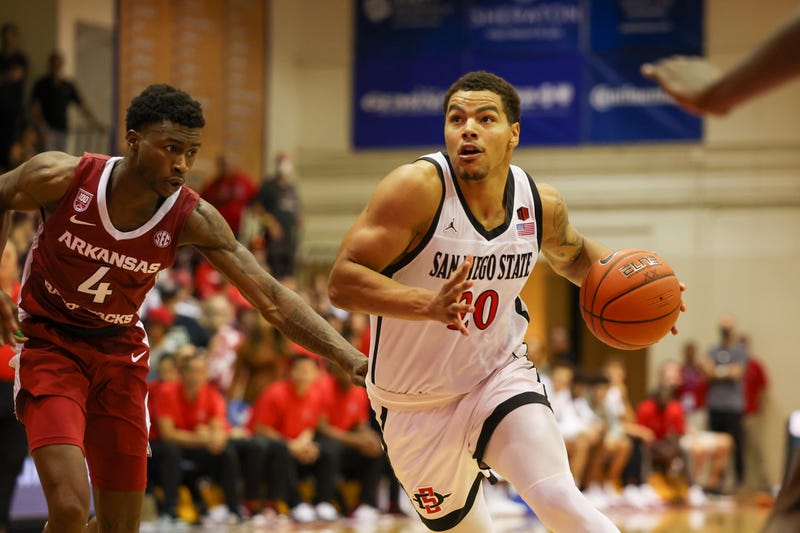 Despite leading from the 11-minute mark of the first half until the final seconds of regulation, the #17 San Diego State Aztecs fell to the #9 Arkansas Razorbacks 78-74 in overtime on Wednesday evening in the Maui Invitational.

The Aztecs led by as many as 11 points in the second half, and led by four points with 17 seconds remaining in the game. A foul from Aztec guard Lamont Butler led to a pair of Razorback free throws to make it a two-point game, while an ensuing steal led to a put-back shot from Kamani Johnson to tie the game at 67-67 as time expired in the second half.

ARKANSAS AT THE BUZZER 😳 WE HAVE OVERTIME IN MAUI!

Arkansas outscored San Diego State 11-7 in the overtime period. The Razorbacks improved to 5-1, while the Aztecs are 4-2 in non-conference play.

San Diego State led by as many as 13 points and shot 48% from the floor in the opening half.

A little flick of the wrist 😎

Matt Bradley, who scored a game-high 23 points and also collected seven rebounds, helped the Aztecs open up an eight-point lead after hitting a three-pointer with 5:32 left in the game. After that point, the Razorbacks finished the second half on a 14-6 run to tie it.

He's got that clutch gene 😤

Both teams struggled from three-point range, as the Aztecs went 2-for-18 and Razorbacks went 3-for-17. Arkansas received 33 points from the bench, while the Aztecs scored 17 from that group.

After a break over Thanksgiving weekend, the Aztecs return to action against UC Irvine on Tuesday evening at Viejas Arena. Opening tip is at 7 p.m.