Antonio Brown got the last laugh in his divorce from the Tampa Bay Buccaneers.

At least that's what the four-time All-Pro appears to believe.

After Tom Brady and the Buccaneers erased a 27-3 deficit in their NFC Divisional Round playoff game with the Los Angeles Rams only to lose on a field goal, Brown shared a meme of himself on social media to celebrate:

Of course, the meme comes from when Brown got into a sideline confrontation with head coach Bruce Arians during the team's 28-24 win over the New York Jets. Brown -- as NBC's Al Michaels put it Sunday -- "disrobed himself off the roster," as he was released after he removed his uniform and stormed off the field in the middle of the game.

While the release of Brown was certain once he acted how he did, you do wonder whether the Buccaneers would still be alive if he was on their roster for the playoffs. The future Hall of Famer had 42 catches for 545 yards in seven games in 2021, and likely would have seen an expanded role once Chris Godwin suffered a torn ACL.

But as the saying goes, some make millions, others make memes. 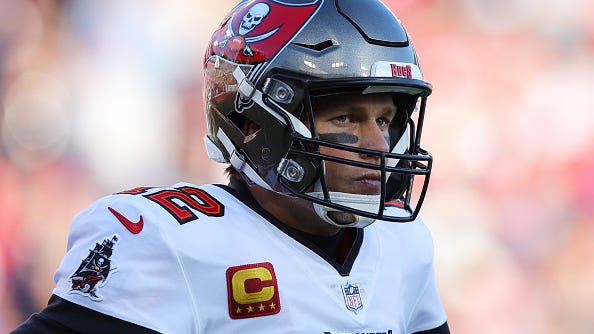 Tom Brady not interested in discussing future after season-ending loss