The top-five players in fantasy football through 12 weeks of the 2021 fantasy football season, using Joe Bryant's Value Based Drafting (VBD) metric as our way of evaluating fantasy production, are Jonathan Taylor, Cooper Kupp, Austin Ekeler, Joe Mixon and Deebo Samuel. Do you know how many of those names were consensus top-10 picks entering the season? Just one — Taylor, who checked in at No. 9 on Fantasy Pros' consensus ranking of Average Draft Position (ADP) entering the year. Ekeler was No. 13, with Mixon following closely behind at No. 19. Kupp was taken fairly early among receivers, as the WR17 and 44th receiver off the board. Expectations for Samuel were significantly lower, as he had an ADP of 82, taken after names like Robby Anderson, Noah Fant and teammate Brandon Aiyuk. 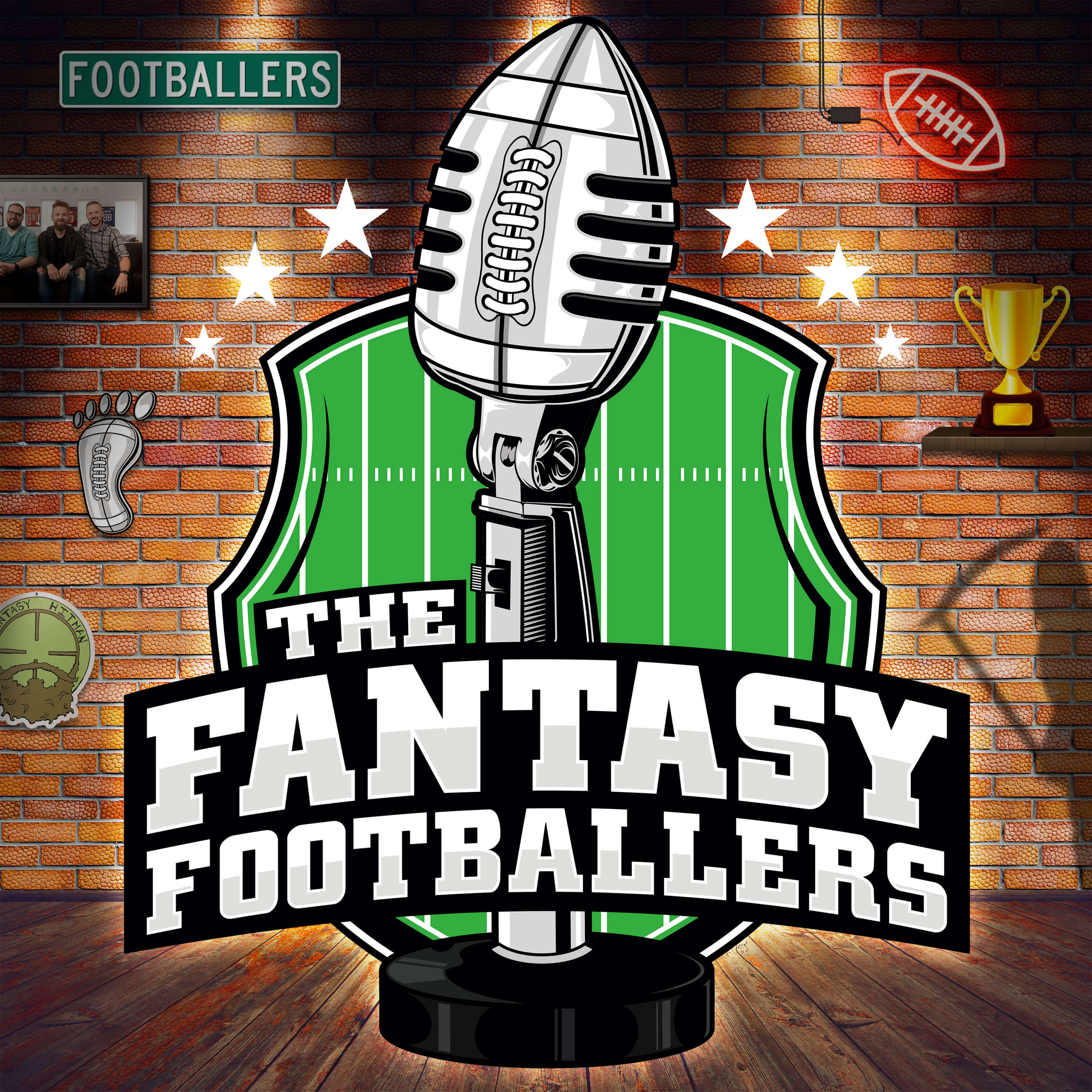 Looking at the draft in hindsight to uncover discrepancies in ADP and actual production, much like the ones you see above, is one way to see just how little we really know about how the football season will unfold. We don't know which players will turn into stars and vice versa. We don't know who will catch the injury bug. We don't know which teams will surprise us as the Cinderella stories of the NFL season, and the same goes for the players within the fantasy football season. And nothing quite shows us that this is the case like the No. 1 overall draft pick.

The very first pick of the draft is seemingly easy to make, but it's never a guarantee. Nothing's a guarantee in sports, which is why the JaMarcus Russells and the Greg Odens of our world exist, and the same can be said for fantasy football. All we can do is give it our best educated approach and/or cave into the pressures of the hundreds of rankings and expert analyses, and pick away.

On Monday, the very large majority of No. 1 overall pickers received a gut punch, one that followed several others over the course of the season, as it was revealed that Panthers running back Christian McCaffrey is done for the year with an ankle injury. He had already been in and out of games, with questionable tags galore throughout the 2021 campaign. He was great when he played in full games — he basically had all 785 of his yards from scrimmage in just five contests — but the best ability is availability, and this was the final blow for owners who held on to him, begging for a stretch of good health.

As the consensus No. 1 overall pick, McCaffrey likely led to a lot of early exits for those who drafted him. Take yours truly, for instance, who selected McCaffrey, J.K. Dobbins and Raheem Mostert as my first three running backs of the draft this year within the first six rounds. Yeah... think I'm having fun in that league?

And here is where we ask the question that was proposed in the headline of this article: with McCaffrey's season over and a bunch of fantasy teams down and out, how have the other consensus No. 1 overall draft picks fared in recent fantasy football seasons? How many times does the pick that is supposed to be as close to a guarantee as possible, the draft slot that's deemed the crown jewel of the fantasy football draft, actually come to fruition?

Using ADP data from Fantasy Football Calculator and checking out the end-of-year results on Pro Football Reference using standard scoring and the aforementioned VBD metric, we've taken a look through the past ten seasons to see how each year's No. 1 pick has done. 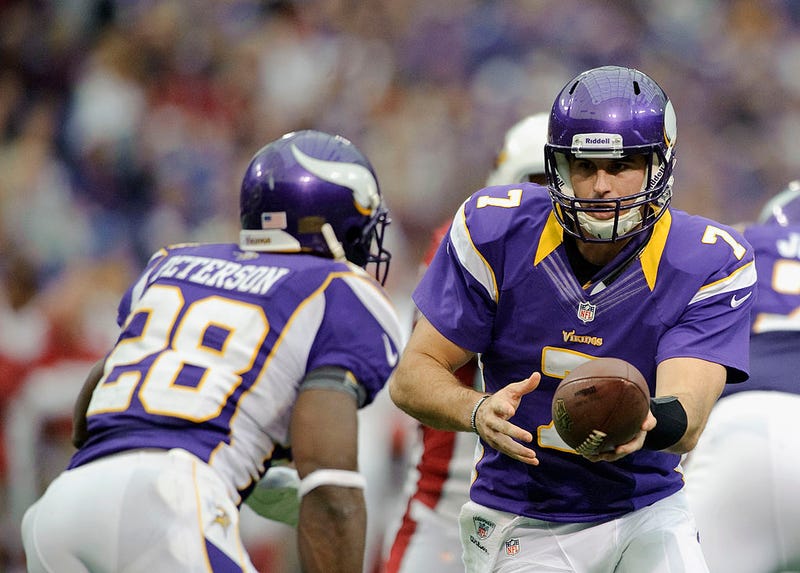 Though he was just waived by the Tennessee Titans, let's still just recognize the fact that Peterson played in 2021 after he was the perceived No. 1 player in fantasy football a decade earlier. Coming off of his fourth-straight season of 1,600 yards from scrimmage and double-digit touchdowns, Peterson simply had to be the top pick in 2011 fantasy football drafts. And for a while, he didn't disappoint, reaching his double-digit touchdown checkpoint in just eight games. But a high ankle sprain in Week 11 left him sidelined for the bulk of that game and for all of the next three.

After a brief return, he got hurt again in the fantasy championships — Week 16 — and left after 52 total yards and a score. Overall, not bad, but leaving a bit to be desired from your No. 1 overall pick.

Actual No. 1 in VBD: Aaron Rodgers

...but it's not like anyone's going to take a quarterback with their first fantasy football pick, you know? The top running back ended up as Ray Rice, who was the No. 2 pick by ADP. 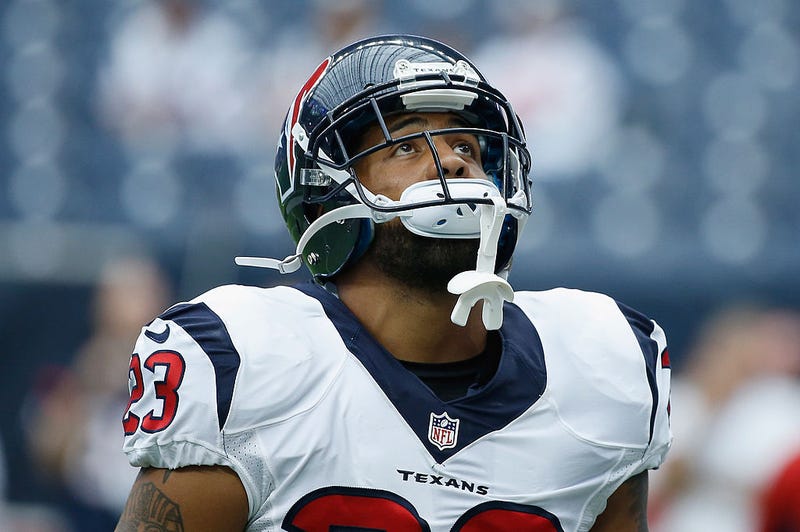 Arian Foster had a short-lived stretch of dominance in the NFL. Photo credit (Scott Halleran/Getty Images)

Foster's usage hit an all-time high, as he received a league-high 391 touches and made a whole lot out of them. His 17 total touchdowns led football, and his 1,641 yards from scrimmage was among the best at the position. But this season may have been the proverbial "final nail in the coffin" in his long-term health.

The next season, Foster hurt his back and missed the entire second half. 2014 was a successful bounce-back campaign, but that was the final effective year of his relatively short career. But for the one year that he was the consensus No. 1 pick, Foster came through for his fantasy owners, just barely getting beaten by...

Actual No. 1 in VBD: Adrian Peterson 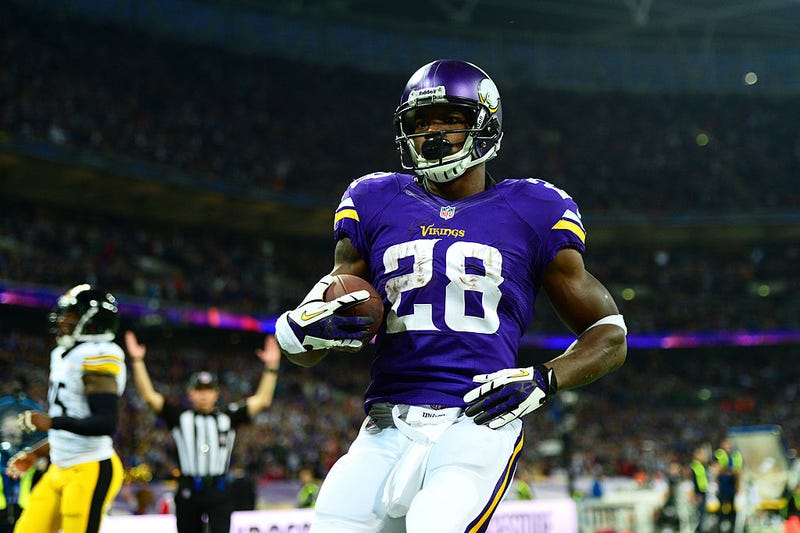 Once again, Peterson returned to the top of the draft board. Photo credit (Jamie McDonald/Getty Images)

And so Peterson was back atop our draft boards, and he turned in another solid albeit slightly underwhelming performance. But again... how could you not take the guy that had just run for 2,097 yards?

Peterson finished with more than 1,400 yards from scrimmage and yet another year of double-digit touchdown scoring — his seventh in seven seasons — though he was once again inactive during a good chunk of the fantasy football playoffs, leaving owners reeling during Week 15 and coming up short in Week 16 with an average game.

Actual No. 1 in VBD: Jamaal Charles 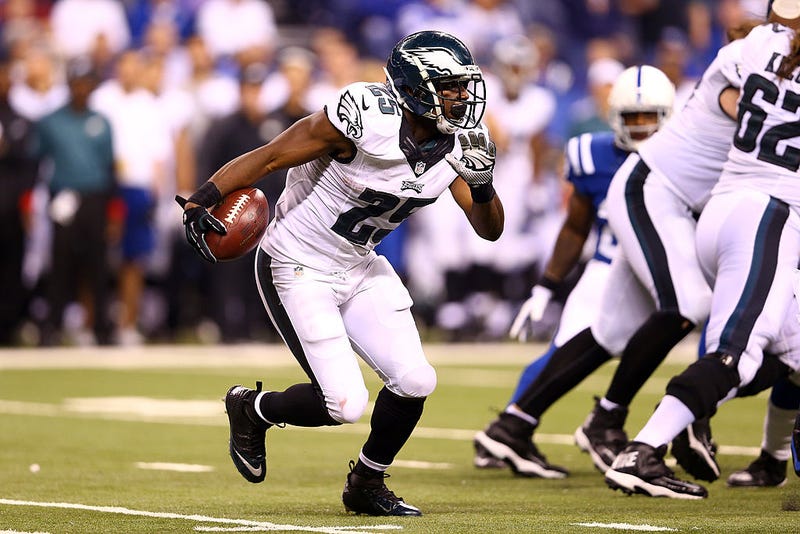 Shady's 2013 campaign was good enough to send him to the No. 1 slot on draft boards. Photo credit (Andy Lyons/Getty Images)

Though it was Charles who finished ahead of McCoy in the fantasy rankings at the end of the 2013 season, a debate raged as to who the best choice would be for the No. 1 overall slot. Ultimately, the ADP data shows that Shady was the guy here, and... well, that wasn't the right call. Charles finished as the RB7, with over 1,300 yards and 14 touchdowns. McCoy wasn't bad, though, earning another Pro Bowl nod with over 1,400 yards. He only found the end zone five times, though, which hurt his stock more than anything else.

It also spelled the end of his career as an Eagle, which may have been the biggest surprise of all.

Actual No. 1 in VBD: DeMarco Murray 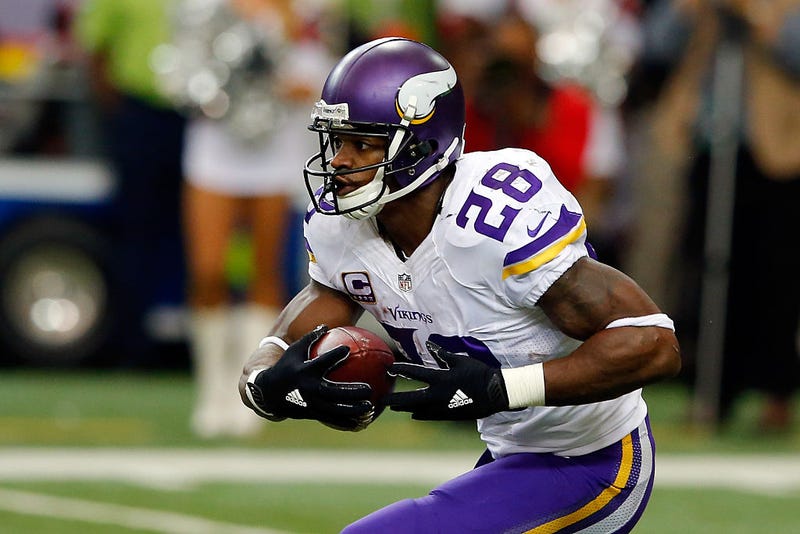 Not to sound like a broken record but... Peterson was the No. 1 pick by ADP in 2015. Photo credit (Kevin C. Cox/Getty Images)

And we're back to square one. Even after missing practically the entire 2014 season due to legal issues, the football community had enough trust in AP and his history of dominant rushing production to go with him as the top dog in the draft, just above wide receiver Antonio Brown (spoiler alert).

Peterson was dominant as usual, leading the league in carries (327), rushing yards (1,485) and rushing touchdowns (11) in an overall down year for running backs outside of...

Actual No. 1 in VBD: Devonta Freeman 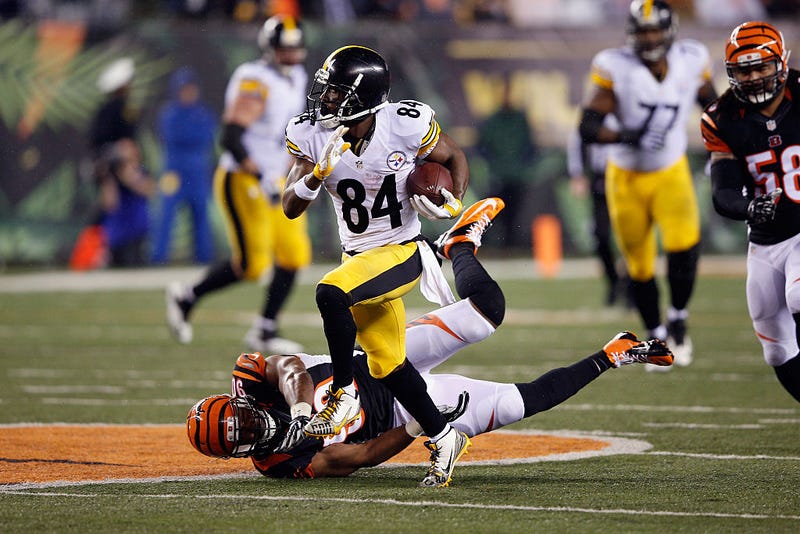 Though it's rare for a WR to go No. 1 overall, Brown was the clear choice in 2016. Photo credit (Joe Robbins/Getty Images)

Even with Freeman's top value-based finish in 2016, Brown was the most productive FLEX player by a significant margin, especially in PPR formats. For that reason, along with the fact that Tevin Coleman was expected to take some of Freeman's workload, he was the consensus top pick based on the ADP stats, and by a convincing margin. Strangely enough, the top-three picks on the ADP board were all wide receivers, which is unusual in the world of fantasy football.

Brown made good on those that chose him that highly, finishing behind only Mike Evans and Jordy Nelson at the position. However, there were several running backs who finished ahead of those wideouts, including...

Actual No. 1 in VBD: David Johnson 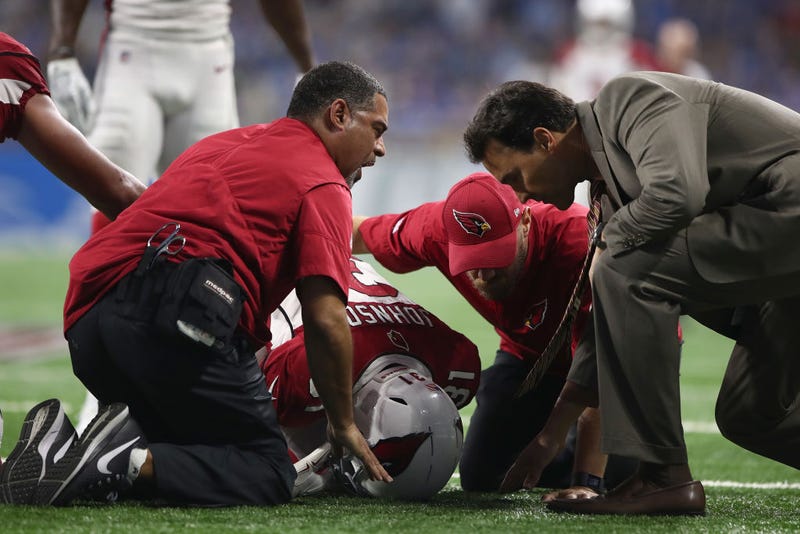 How were you not supposed to take Johnson after he punished opposing defenses for over 2,100 total yards, 20 touchdowns and the most fantasy points by far by any non-quarterback? But the follow-up to his magical season was unfortunately stopped short when he dislocated his wrist in the first game of the season, sidelining him for the whole year. One has to wonder what could have been if Johnson's health had held up, which can also be said about...

Actual No. 1 in VBD: Todd Gurley 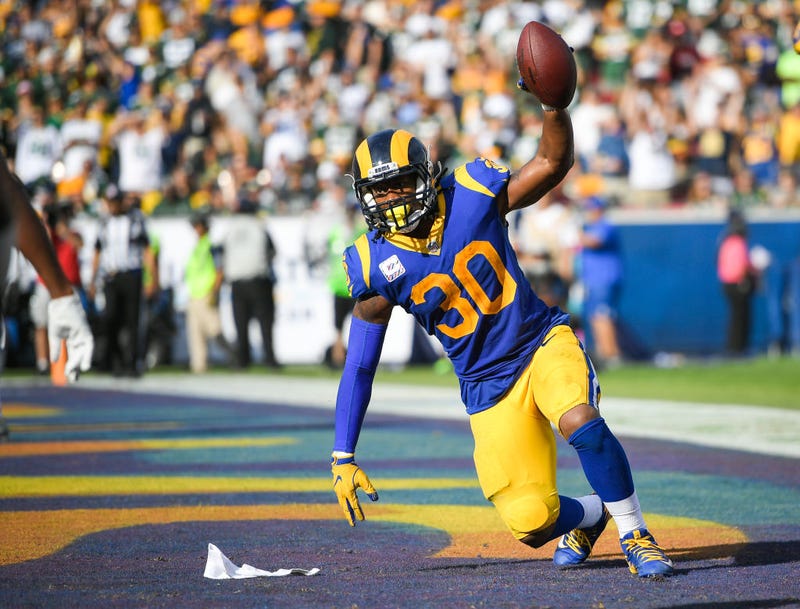 Todd Gurley's two-year stretch in 2017 and 2018 is few like any other. Photo credit (John McCoy/Getty Images)

Finally! We have a No. 1 draft pick who finished above everyone else! Who knew things could go so smoothly? Also, isn't it weird to think that Todd Gurley, David Johnson and Le'Veon Bell were the top three picks, in terms of ADP, of the 2018 fantasy football draft? My, how running backs age.

Gurley was an absolute monster in 2017, with nearly 2,100 yards and 19 touchdowns from scrimmage, and he was just as good in 2018 with 1,831 yards and a league-high 21 scores. His precipitous decline wouldn't come until two years later, though he showed signs of slowing down in 2019 before really losing a step as a member of the Falcons. 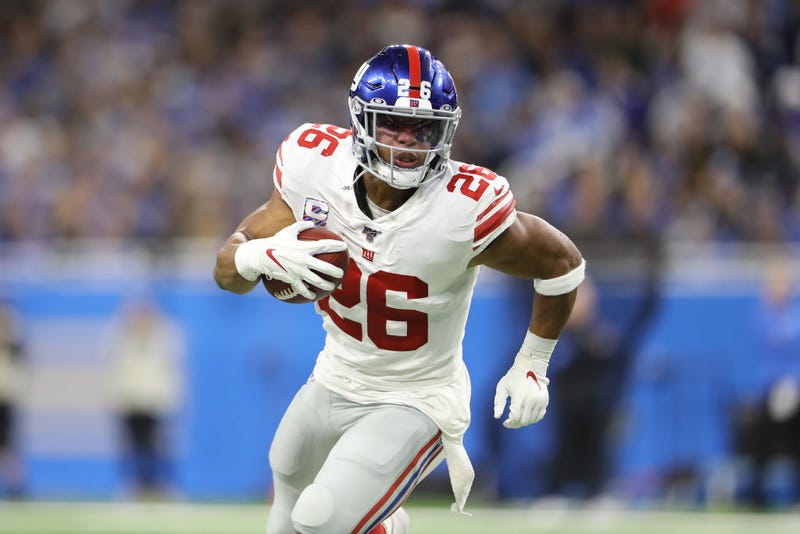 Barkley's rookie season was special enough to see him at No. 1 for 2019 drafts. Photo credit (Rey Del Rio/Getty Images)

Concerns with Gurley's health intensified after he missed the final two games of 2018 and looked particularly poor in the late rounds of the playoffs, and so it was time for another budding star to take over the top of the draft boards. Barkley's phenomenal rookie season saw him go for over 2,000 total yards and finish at No. 1 in a PPR format, so it's no surprise that he ended at the top of the board.

Unfortunately, Barkley's well-documented lower-body injuries began in 2019, with a high ankle sprain in Week 3 forcing him out for a few weeks. He still had a fine season — 1,441 yards and eight scores — but it wasn't exactly what you were looking for from the No. 1 overall pick.

Actual No. 1 in VBD: Christian McCaffrey 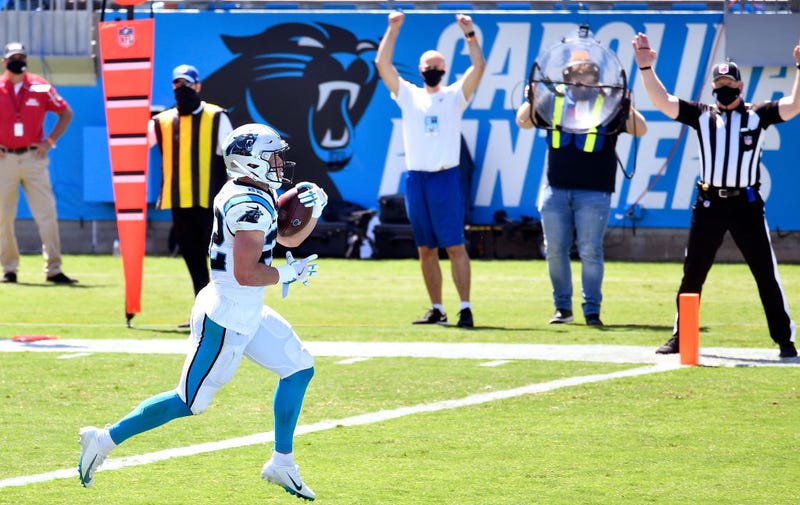 CMC's battles with staying healthy have prevented his last two seasons from living up to the No. 1 overall expectations. Photo credit (Grant Halverson/Getty Images)

Sensing a pattern here? A guy breaks out with a 2,000-yard, double-digit-TD season, then gets hurt the year that he ascends to the top of the draft board. I don't know what it is, but save for Gurley, there's a pretty good amount of evidence that this is just how it is. For McCaffrey, this was the first of two consecutive years in which he was both taken No. 1 overall in nearly every fantasy draft and hurt for the large majority of the season.

Actual No. 1 in VBD: Derrick Henry

Oh, and Henry got hurt this year too. It's a brutal world out there.