James Harden refuted reports that he wants out of Brooklyn after this season, and has said he is committed to winning a title with the Nets. But other NBA teams are reportedly gearing up for Harden heading to Philadelphia to join Joel Embiid and the 76ers, and those rival teams are already preparing to combat such a move.

On his latest “Posted Up” podcast, Chris Haynes of Yahoo! Sports reports that multiple teams are already prepared to ask the NBA to investigate potential collusion between the Nets superstar and the Sixers if Harden indeed does wind up in Philadelphia this summer.

“I’ve talked to a rival owner and talked to rival front office executives who believe that there can be some talk going on now between both sides, and this is what I was told,” Haynes said. “Some front office executives are prepared to, when the time comes if a deal looks like it’s about to transpire where there could be a potential sign-and-trade in the offseason, they’re prepared to get the league involved in a potential collusion case, dating back to what they believe could be going on right now, as to why we’re hearing a lot of Philadelphia/James Harden talk.”

Per Haynes, part of that unease among rival executives is linked to Harden’s friendship with Sixers co-owner Michael Rubin.

"There's another player we're going to add to this dynamic: Michael Rubin. For those who don't know, the Sixers co-owner is very, very, very good friends with James Harden. And I've been talking to a rival owner, talking to rival front-office executives, who believe that there can be some talk going on now between both sides."

Jake Fischer of Bleacher Report reported earlier this week that Harden has grown frustrated in Brooklyn due to Kyrie Irving’s playing status due to being unvaccinated, and head coach Steve Nash’s rotations. Harden responded to those rumors by saying that he is “frustrated,” but only because he wants to win in Brooklyn, where the Nets are currently struggling to stay in the top half of the Eastern Conference without the injured Kevin Durant and Joe Harris, to only add to their troubles of only having Irving available for road games. 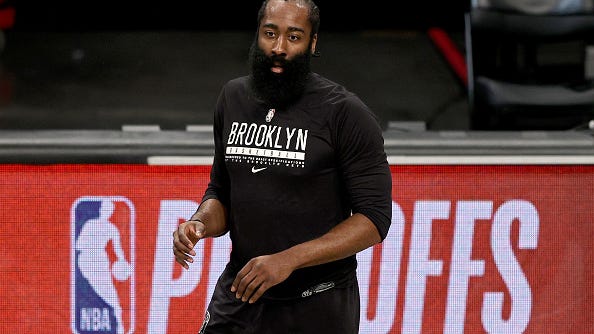 James Harden addresses report he is unhappy: 'I'm frustrated because I want to win'

A later report by ESPN’s Adrian Wojnarowski suggested that Harden is committed to the Nets, and expressed that to ownership, but he has been linked to Philadelphia as a potential destination, and if that were to happen this offseason, other teams would apparently be ready to pounce in protest.

“If it does get to the point where it looks like James Harden will be heading to Philly, I was told there will be complaints issues to the league on trying to investigate if there was any collusion or talks of recruitment going on right now, which is illegal and against the CBA,” Haynes said.