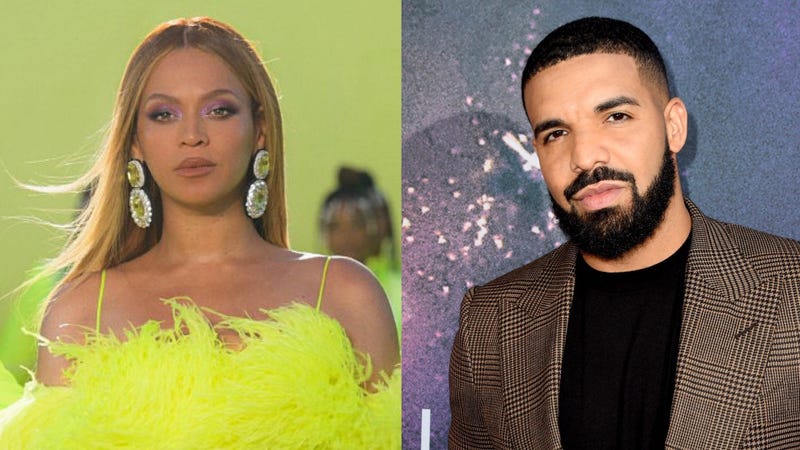 By RADIO.COM
Beyoncé and Drake are all about getting fans out on the dance floor with their recent, individual releases. Both heavily reminiscent of ‘90s house music and completely not what fans expected, Rolling Stone Music Now host, Brian Hiatt, couldn’t help but dive deeper into both.

Drake shocked fans with a surprise release of a brand new album, Honestly, Nevermind just last week.
“It’s interesting in how responses to the record so far have been… at first not liking the album and then coming around to it and being excited to dance to it or whatever” Rolling Stone Sr. Editor Jeff Ihaza told Hiatt after admitting the project gave fans a different vibe than they expected from Drake.

“With this [album] I think this is one of the first just genuine expressions we’ve gotten from him in a long time,” Ihaza continued. “With these [tracks] it’s more just like these are Drake where Drake is at.”

Meanwhile, Queen Bey revealed she’ll be releasing a new album for the first time in six years this July and debuted the track, “Break My Soul,” from the forthcoming project.

“I’m excited,” shared Rolling Stone writer Mankaprr Conteh of the forthcoming project. “I see Beyoncé… having a really powerful voice, having interesting songwriting and and doing it over upbeat dance music that you can just feel in your body.”
Hear more about what Ihaza, Conteh and Hiatt have to say surrounding the new music and fresh vibe for both artists on the most recent episode of Rolling Stone Music Now.
Rolling Stone Music Now, hosted by Rolling Stone senior writer Brian Hiatt, focuses on sharing the biggest stories in music through fresh interviews with top artists, expert insight on new releases and breaking news from the Rolling Stone staff, and more.