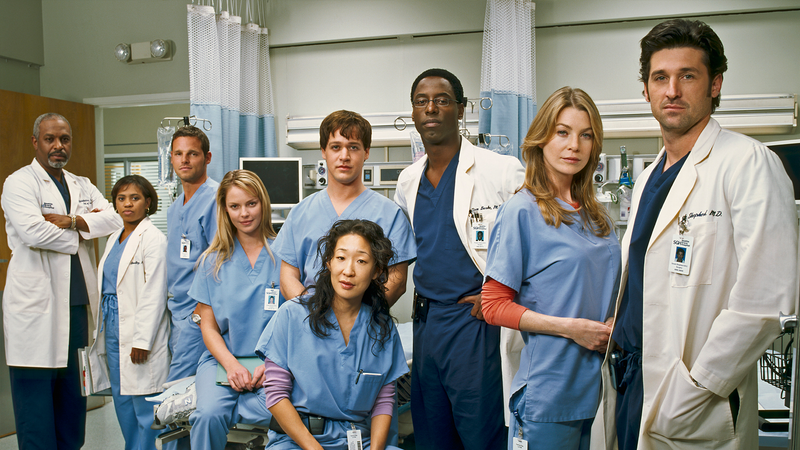 Yes, Grey’s Anatomy is a show about doctors. But like, let’s be real, it’s so much more. And what makes the series so freaking iconic, other than the crazy storylines and attractive cast, is the music. Which could honestly be argued to be a character in its own right. That’s probably because that’s exactly what show creator Shonda Rhimes wanted, and by now you should know, Shona gets what Shonda wants, because she writes it so.

In a post on Shondaland, Alex Patsavas, the show’s longtime music supervisor explained, “Shonda wanted the songs to tie scenes together, and to act as a score. She didn't just want short bursts of sound: She wanted music with purpose. This directive gave me an opportunity to look under every musical rock and stretch my choices into both the emotional and the sassy.” Well, mission accomplished.

From countless death scenes, surgeries and weddings to our favorite McDreamy moments and emotional Meredith monologues, the songs selected to accompany them truly help piece together and round out each episode. So here’s a list of 10 of them that will undoubtedly trigger those most memorable show moments. We’ve ranked them according to how much they destroyed our lives and had us screaming “Somebody Sedate Me!” Heads up though, tons of spoilers below, so proceed with caution.

Be honest, you can’t think of Grey’s Anatomy without thinking of this song. With that said, it’s surprising that the track wasn’t actually used until the end of the second season in the episode where the interns are convinced more people will die (remember, the rule of the threes and sevens). It was sad or whatever, but mostly we can’t imagine a Grey’s Anatomy music list without this song on it. Just like Cristina is Meredith’s person, “How To Save A Life” is Grey’s Anatomy’s song, we dare you to try and convince us otherwise.

9  Where Does The Good Go - Tegan And Sara

This is the Meredith and Cristina “dance it out” song from season 1, we associate it with happy feelings, as we should. But before Cristina’s departure in season 10 the duo had one last “dance it out” session and so of course they went with this song and it was so freakin' bittersweet. Then Cristina left, Meredith lost her person and our lives were meaningless. While it's definitely not even a top contender for one of show’s saddest moments, we’re still crying. Mostly because they ruined a happy song from Season 1 and left us with so many feels, primarily empty ones.

Remember in season 9, after Ben and Bailey got married and they were having their first dance and Webber was lovingly watching them? Well while it should have been a joyous moment, it turned out to be more bitter than sweet. Because while Richard was white knuckling it for his dear friend Bailey, Meredith had to walk over and destroy it by getting Richard to tell her about his wife Adele’s death. As if Ed Sheeran songs didn’t already want to make us cry.

Be still our broken Japril hearts. We’re still not over their break-up but this scene in season 10 helps ease the pain. In episode 12, April was about to marry Matthew but she was low-key in love with Jackson and he was totally in love with her, it just took him a minute to figure out just how much. So when he stood up in the middle of their wedding and declared his love. Ugh! We we’re like please send help! Not helping the matter was the faint intro to Bonnie Tyler’s heartbreaking “Total Eclipse of the Heart” in this case sung by Jill Andrews.

Remember the code black situation in season two when a patient has a bomb inside of him? Meredith sure does. This season 2 episode had us at the edge of our seats, holding our breathe until the very end. Left to deal with the situation without her intern besties, just Burke and a dude from the bomb squad, oh and that vision of McDreamy. Meredith had to pull the bomb out of her patient’s body. Throughout the entire nerve-wracking scene “Breathe” softly played in the background. And though we should have known better, maybe not, it was only season 2, we let Nalick’s hopeful and uplifting melody deceive us into thinking everything was going to be okay once Meredith handed the grenade/bomb off to that guy from the bomb squad, but as we all know, it wasn’t.

Remember when Mark Sloan... Nope. We don’t wanna. Personally this was a defining moment for us, that resulted in us needing to walk away from Grey’s for a bit, especially after Lexie’s death the season before. IT WAS ALL JUST TOO MUCH, and honestly we haven't listened to Kodaline since.

4 In My Veins - Andrew Belle

Soooo yeah… Grey's really knows how to slay a season finale episode, and the season 6 finale was certainly no exception. Ya’ll probably remember Charles Percy (one of the Mercy West Hospital doctors) well he gets shot by a disgruntled widower, and when Bailey tries to save him from dying by getting him down to an OR, she realizes the elevators had stopped working and that she had to let him die, along with our hopes and dreams. And while we were crying until there was literally no water left in our bodies, Miranda comforted him in his final moments while sitting on the hospital floor. Oh, and Mandy Moore was there too.

Remember when Burke left Cristina at the altar and then she went back to his apartment to find that he had left for good, and then she started to cry and hyperventilate, and then she couldn't get out of her wedding dress, and then Meredith had to cut her out of it and the whole thing was hella sad. Ugh same, but then we remembered that “all we can do is keep breathing,” and that even though she was heartbroken, Cristina was free, y'know? She was finally free.

This one hit us like a semi truck… too soon? Another season finale featuring another goodbye song, but this time, we didn’t realize who we were saying goodbye to. As an ending to season 5, George went off to join the Army, however ended up getting hit by a truck and rushed to the hospital completely unrecognizable. Remember when her wrote “007” in Meredith’s hand to tell her it was him, before drifting off to arguably one of the most epic elevator scenes in the show's history (and there are A LOT). As if we weren’t already crying hard enough, at the same time Izzie has a near death experience due to her battle with cancer. So of course she enters the elevator to go, well you know “upstairs” and when the doors open George was standing there to greet her and everyone was like NOOOOOOO! In the end, Izzie survived, but George wasn’t as lucky and once again we said goodbye.

This Snow Patrol hit is arguably the most famous and tear-inducing song ever featured on the show. We first heard it in the season two finale, while we were sobbing watching Izzie lay in the hospital bed with the recently departed Denny. After which they continuously chose to bypass destroy and completely annihilate us, using the original and covers of the song many more times for major heartbreaking moments, with the cruelest probably being Derek's death. Push two of epi, STAT. Charge to 300. Clear. Time of death... Every time we watch a scene with this song.