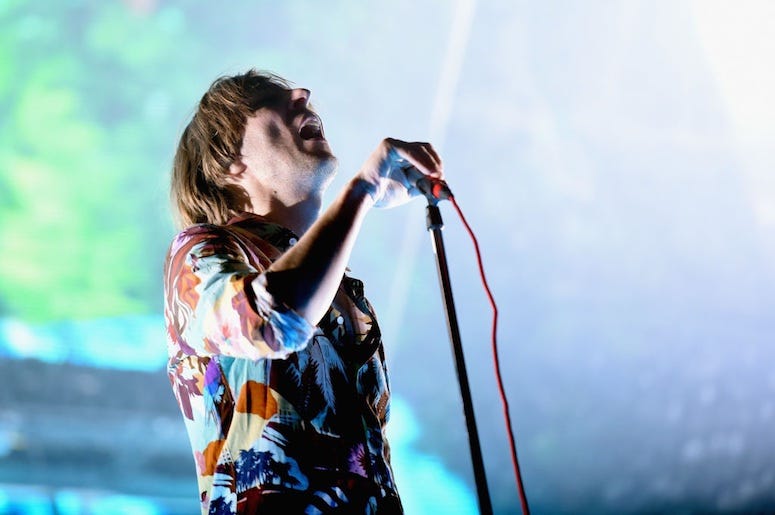 Guitarist Christian Mazzalai and vocalist Thomas Mars of Phoenix joined Bryce Segall on RADIO.COM's New Arrivals show this week and took us inside the creation of the score they were commissioned to create for the Sofia Coppola film On the Rocks. The duo also explained why they’d be content to call it a day after ten Phoenix albums.

“There were more happy accidents with the score,” Mars said of the band’s work on the On the Rocks. Phoenix had a lot of creative freedom on the score and ended up using recordings from their upcoming album to fit the film. “We were also working on our record and sometimes I would play demos that we did for the album so it was more like ‘yeah I like this… Work on this… This could go with this scene.’ It was a nice collaboration.”

After Bryce asked whether or not the film score influenced the album, Mars replied, “it did influence the one song that’s at the end of the movie that will be on our record.”

“That’s the link between the two,” he added. “Originally ‘Identical’ was a song we were working on for our record. When we put it there, it really matched so we had to finish it quickly and get it in there.”

Mars also added that another song appearing at the end of the film with the working title “Capricorn” may appear on their new record. However, he said “we don’t know if that is going to be a song on the next record or not.”

On the Rocks is not the first film score Mars has been a part of. He shared a fascinating story about his appearance on the Air song “Playground Love,” which was a part of the 1999 film The Virgin Suicides soundtrack.

In Phoenix’s early days, Mars and his bandmates were well acquainted with Air as he was asked to fill in as a temporary vocalist during the film’s soundtrack recordings. Originally, Air wanted David Bowie to sing on “Playground Love,” but Mars said he filled in as a temp and “they ultimately liked it, so they didn’t ask him [Bowie], which was a nice surprise.”

Phoenix is very methodical with their work and creative decisions, something that has been aided by the brand new studio the band calls their own. Mars calls it “the novelty we needed.”

As a result, he thinks Phoenix is “close to a new record,” but admits the “last time I said this was when we were a year away so I don’t want to jinx it.”

“We chose a new direction, but it’s still blurry,” Mazzalai added. “It’s one of our favorite moments when we feel we have something, but we don’t control it.”

“The next few weeks will be very important to us,” he added.

Whenever their new album comes out, it’ll mark the seventh in the band’s career. If it’s up to them, they’d be content to record three more albums as a group before retiring.

“We usually struggle to come up with ten [songs]. We want every album to have ten songs,” Mars explains.

“We started this thing and for us it’s nice. Sometimes there are certain rules that are worth doing. In my mind it would be like, ten albums and ten songs, and then we could move on and be carpenters in the countryside.”

Listen to the full interview with Christian and Thomas above.

RADIO.COM's New Arrivals with Bryce Segall is your destination for what's next in the Alternative landscape. Pairing new music from the artists who define today's sound against tomorrow's voices, on a given night listeners can expect not only first plays and premieres from future favorites, but also exclusive interviews with the most prestigious of the genre's talents. Early guests include Kevin Parker of Tame Impala, Damon Albarn, 100 Gecs, Phoebe Bridgers, Robin Pecknold of Fleet Foxes, Romy of The xx, James Blake, Julian Casablancas of The Strokes, and more.