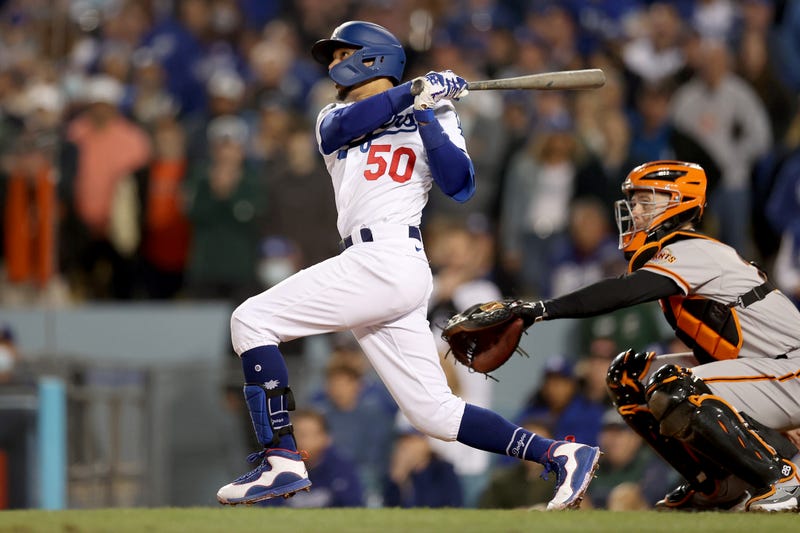 Mookie Betts #50 of the Los Angeles Dodgers watches his RBI sacrifice fly out against the San Francisco Giants during the fifth inning in game 4 of the National League Division Series at Dodger Stadium on October 12, 2021 in Los Angeles, California. Photo credit Ronald Martinez/Getty Images
By Marcus White, KCBS Radio

The San Francisco Giants' and Los Angeles Dodgers' seasons will come down to another winner-take-all game in their historic rivalry.

The series will conclude with a decisive Game 5 at Oracle Park on Thursday night, with first pitch scheduled for 6:07.

Los Angeles never trailed Tuesday night, taking a 1-0 lead in the first inning thanks to Trea Turner's RBI double. Dodgers superstar Mookie Betts' two-run home run in the bottom of the fourth made it 4-0, and his sacrifice fly the next inning made it 5-1.

Will Smith put the game away with a two-run home run in the bottom of the eighth, giving the Dodgers a 7-2 lead.

Will Smith to Bel Air. pic.twitter.com/nhrUYad53i

The Giants and Dodgers had never played in a playoff series prior to this year, when they finished first and second, respectively, in the National League West. San Francisco won a franchise-record 107 regular-season games, while Los Angeles matched a club record with 106.

One team's season will end Thursday night in San Francisco, and the winner will have little time to celebrate newfound bragging rights in one of baseball's oldest rivalries.

The best-of-seven National League Championship Series begins Saturday. If the Giants win, they'll host the Atlanta Braves and play for their first pennant since winning the World Series in 2014.

If the Dodgers win, they’ll travel to Atlanta to play for their fourth pennant in five years. The Dodgers erased a three-games-to-one NLCS deficit against the Braves last year to advance to the World Series, which Los Angeles won for the first time since 1988.

Thursday's contest concludes the first playoff series between the Giants and Dodgers, whose rivalry dates back to when both teams called New York home prior to their moves to the West Coast in 1958. But it won't be the first win-or-go-home game between the two.