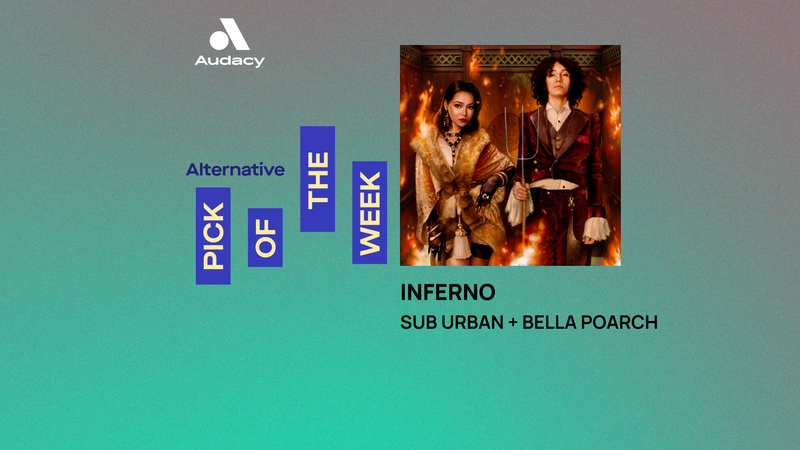 This week’s Audacy Alternative Pick of the Week is Sub Urban and Bella Poarch's "INFERNO."

Sub Urban is no conformist when it comes to breaking boundaries within alternative pop music. The 21-year-old singer, songwriter, and producer born Daniel Maisonneuve has spent the last few years writing captivating, otherworldly music as a means of processing the turmoil of a tumultuous coming of age. Even on his most beloved songs, he sings about heavy themes—addiction, anxiety, and the lonely weight of existence. But as he finishes the follow-up to his 2020 debut, Thrill Seeker, he’s fine-tuned his craft into a fresh and idiosyncratic musical concoction. “My sound has shifted and grown with me over the course of this past year and a half,” he says, “but to be honest, I feel like it’s what I should have done immediately after ‘Cradles.’ However, having taken all that time, I’m more certain in my sound than ever before.” Sub Urban’s first hit, 2019’s “Cradles,” paved the path for a new generation of alternative. Buoyed by TikTok virality and a stunning music video, the song hit #1 at U.S. alternative radio and has since earned nearly 400 million views on YouTube. Though Thrill Seeker was mostly made up of songs written before “Cradles,” it reinforced Maisonneuve’s imaginative worldbuilding; he’s only just started to dream of new wrinkles to add to Sub Urban. Even with his grim aesthetic, this new era is fueled by the mania of creation—the exciting energy of ushering in a whole new world.

Infinitely fascinating and unpredictable, Bella Poarch is a true force of nature. Not only the world’s third-biggest TikTok star (with over 77 million followers and counting), the Filipino-American is a U.S. Navy veteran who’s created countless home recordings based on her emotional & raw life experiences. Originally hailing from a tiny farm in the Philippines, Bella first discovered her vocal gifts as a little girl and started performing at school talent shows despite her parents’ disapproval. She enlisted in the U.S. Navy at 17, where she proudly served working on helicopters and jets across the States and Japan, and ultimately landed in Hawaii as her contract was ending. Based on her friends’ suggestion, Bella downloaded TikTok in early 2020 and soon found a community who propelled her to the most-liked TikTok video of the year – an August 2020 post that’s accrued more than 50 million likes. By September 2020 she’d moved to L.A. to focus on her career goals a musician, and now, with her debut single “Build a Bitch,” produced by Sub Urban, and more music to come, Bella Poarch delivers her own diverse and alternative brand of dark pop.