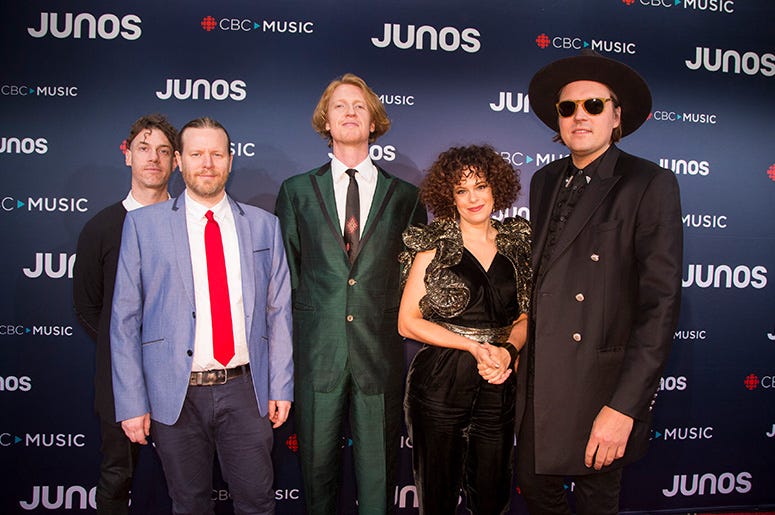 Colbert described the group’s latest single being “inspired by the current climate of the country, with a hopeful message to the youths.” With that, fans were lead into a smoky quasi-recording basement by a young boy with black hat and jacket to match. He screamed “This is generation A, and we’re not going to wait,” as Arcade Fire got to work on the melody.

Lead singer Win Butler belted out lyrics that punch any halcyon notion of the future square in the face. They are words of change.

“They say wait until you're older / And you will understand / They say the generation's coming / But I don't think they understand that I am not a patient man.” The sound and mood express a gritty, high energy resistance with Mick Jagger and Clash undertones.

Since early October, Arcade Fire used their music with political consequence. They joined a litany of artists for Good Music to Avert the Collapse of American Democracy, Volume 2, a limited time compilation of new music to inspire voting. The second volume clocks in at a whopping 77 total songs ranging from new tracks, live recordings, and classic covers.

Good Music To Avert The Collapse Of American Democracy, Volume 2, a compilation album with many artists' previously unreleased music, is available for one day only this Friday, 10/2 on @Bandcamp.

There might also be new music on the horizon for Arcade Fire. Butler told Rick Rubin on the Broken Record podcast, “Once your body's already going, there's no stopping it, so I've just been writing.” That’s just a baroque way of signaling new music. He made his point more clear later in the interview.

"I can't remember a time where I've written more," Butler said. "Just feels like being 18, just sitting at a piano for five days in a row and working on a melody for a verse."