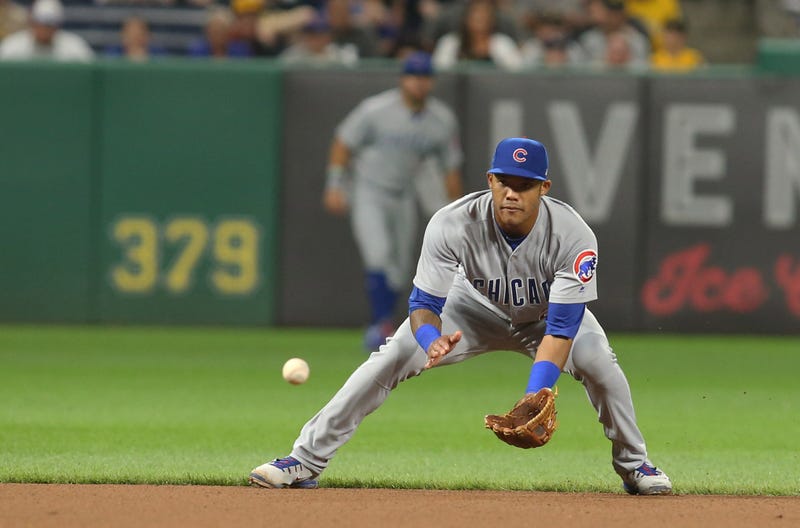 CARLSBAD, Calif. (670 The Score) -- The Chicago Cubs remain in close contact with shortstop Addison Russell as they continue to support his rehabilitation program and weigh his future with the organization after he was suspended under MLB's domestic violence policy.

Russell accepted a 40-game suspension after the league oversaw an investigation into accusations of physical, emotional and verbal abuse against Russell that were leveled by his ex-wife, Melisa Reidy-Russell. The two were married in 2016 and split in 2017. Russell still has to serve 28 games on the suspension, meaning he'll miss the first month of the 2019 regular season.

The Cubs are still considering the possibility of releasing the 24-year-old Russell. As they decide his future, the organization is working with Russell and Reidy-Russell to provide support as needed. As part of his punishment, Russell must partake in a confidential and comprehensive evaluation and treatment program supervised by the joint policy board.

"We couldn't talk to him about anything of substance until MLB wrapped up its investigation," president of baseball operations Theo Epstein said Monday as the GM Meetings opened. "So now we feel we need to speak to everyone involved in the situation and to really engage with Addison. This incident happened on our watch. This happened with one of our players, and he will serve out his discipline for his behavior."

The Cubs have vowed to not shy away from this issue or their responsibility to all involved in it.

"Domestic violence is everybody's problem," Epstein said. "This did happen on our watch, so we have to be part of the solution. For us, it means prevention. It means doing everything we can as an organization to make sure it never happens again. Interfacing with families and the players, protection, intervention, awareness -- all a part of it. We can't be positive it will never happen again in our organization, but it has to be the goal. We are taking steps in that regard. Addison has been handed his discipline, and he will serve it."

The Cubs are hopeful that Russell can stay in the organization if he does the outside work he needs to do.

"I also think part of the solution can possibly include rehabilitation," Epstein said. "That means taking steps to be sure the individual is worth investment, so he can grow, so that this never happens again with him. We are in that process. We have a robust mental skills department. We are very engaged with Addie. We are trying to verify he is serious about self-improvement and adding more stability to his life. Everything remains an open question. We have not made any determinations. The only determination we have made is we need to be part of the solution."

Russell will speak out and give his thoughts at the appropriate time, Epstein said.

"This is a guy who we mostly developed in our organization after the trade," Epstein said in reference to the July 2014 deal with Oakland that brought Russell to Chicago. "We are a big part of these players' development. We take credit when players grow up and have great success. We are proud of playing a small role in that. When we have a player that has something go the other way, does that mean you automatically cut bait and have it become someone else's problem or society's problem? Or do you explore the possibility of staying connected to that player with the hope of rehabilitation? I think these are difficult things to wrestle with. I am not so sure the answer is to simply cast the player aside."