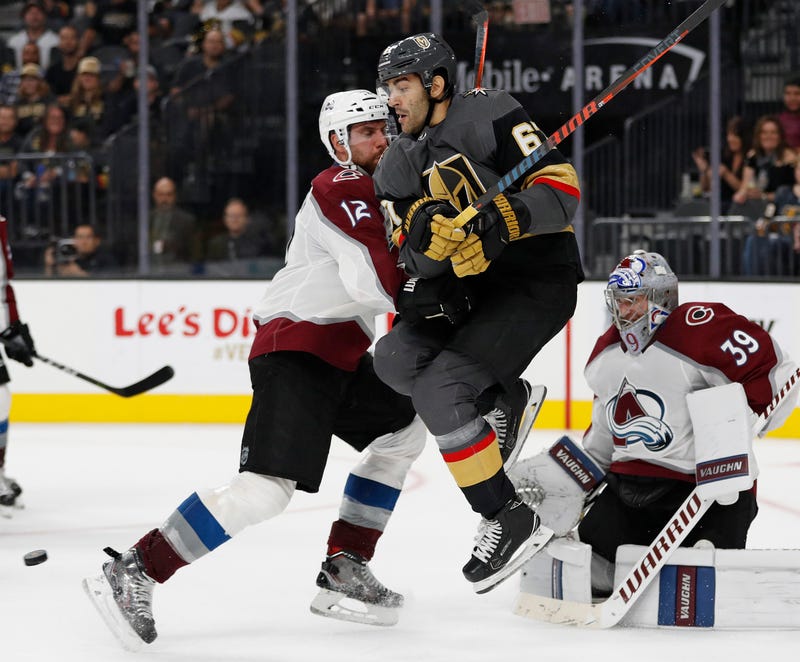 LAS VEGAS (AP) — The Vegas Golden Knights stunned the league with a run to the Stanley Cup Final in their inaugural season and almost seemed to be leading a charmed existence.

But the storybook season ended with the Washington Capitals hoisting the Cup on Vegas' home ice and the bitter taste remains, which is driving the defending Western Conference champions as they prepare for season No. 2.

"We didn't win anything last year, so we have every reason to be hungry and motivated going into the season," said William Karlsson, whose breakout season saw him finish third with 43 goals. "There's a lot of people saying we can't do it again, that it was all luck. So that's just extra motivation for us."

Karlsson, who along with Jonathan Marchessault and Reilly Smith form one of the top lines in the league, said the Knights are well aware other teams will be gunning for them this season.

That includes Pacific Division rival San Jose, which was ousted by the Golden Knights in the conference semifinals and traded for two-time Norris Trophy-winning defenseman Erik Karlsson on the eve of training camp.

Vegas also did a bit of reloading after losing forwards James Neal and David Perron to free agency. The Golden Knights bolstered their offense with the additions of Max Pacioretty and veteran center Paul Stastny.

Pacioretty and Stastny figure to upgrade the second line, where they'll likely be joined by Alex Tuch, who emerged for the Golden Knights during his rookie season last year.

Marc-Andre Fleury agreed to a three-year contract extension worth an average of $7 million a year and is back for his 15th year in the league after winning 29 games last season.

"We can't be thinking it's gonna be easy to get back there again," Fleury said. "It's really hard and the parity is so good around the league. We're not going to duplicate last season. I think it's all about staying even keel and keep that same one-game mentality. Try to win, try to get two points."

Here are some things to watch as the Golden Knights prepare for their second season:

FLOWER POWER: As great a season as Fleury had, the veteran keeper said lessons he learned in Pittsburgh keep him from assuming the playoffs are automatic the following year. By putting too much pressure on one another, he saw his own game suffer after helping the Penguins to back-to-back Final appearances, losing in 2008 and winning it 2009.

"The next few years I felt like it was all or nothing," said Fleury, who recorded the best statistical regular season of his career last year with a 2.24 goals-against average and a .927 save percentage. "Maybe putting too much emphasis on winning the Cup, too easily. Maybe I forgot how hard it is or putting too much pressure on every game or thinking too much, instead of just enjoying the game, going to play hard, work hard and enjoy every practice, every game, the time with the boys, not just thinking about the pressure of winning all the time."

GOOD FIT: Pacioretty has warmed up to his new teammates quickly and he said Vegas' fast-paced style fits his game perfectly. He and Stastny have a built-in chemistry as former linemates on the U.S. men's national team.

"We play such a fast game, it's just so much fun. You don't have to think out there, we're all on the same page," Pacioretty said. "I really enjoy this system and I think it allows all players to show what they're made of. Fast game is fun."

WELL-ROUNDED GAME: Fourth-line forward Ryan Reaves, who was acquired at the deadline last season and has become a fan favorite, said the team's appreciation for his offensive skills has helped boost his confidence. Reaves has an on-ice reputation of being a physical bruiser but he scored the game-winning goal in Game Five of the Western Conference Final to defeat the Winnipeg Jets.

"The fact they signed me to the contract they did for two years, obviously puts a lot more confidence in my game," Reaves said. "You don't want to just be out there running around kind of just banging a body and then getting off. You can't win games without goals on the board so you gotta help out when you can. I want to chip in more offensively, I want to play better defensively, I want to make sure I'm taking care of my (defensive) zone and I want to make sure I'm always playing physical, that's one part of my game that I don't think ever is going to leave me."