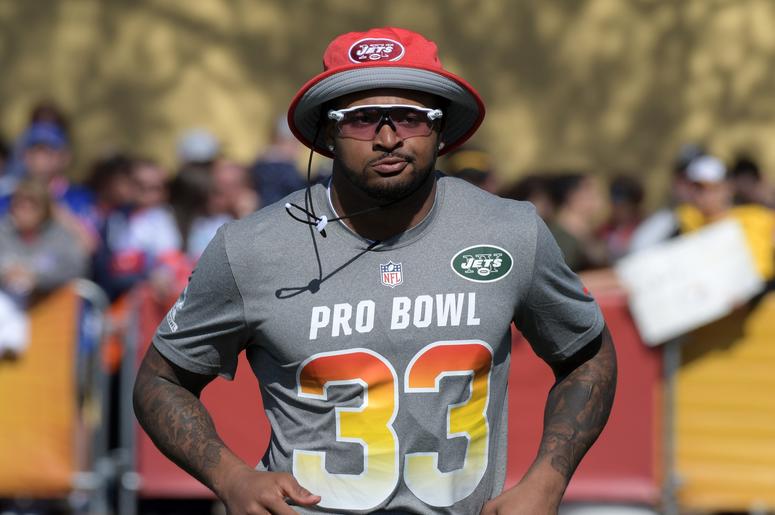 “It definitely could have been a lot worse,” Adams said of tackling Pat the Patriot, during an appearance on "Taz & The Moose" on Friday. “I honesty just jumped on him.”

This one is for every Patriots hater out there! I got y’all! pic.twitter.com/q0WAbDfrpL

Though the tackle was staged, Adams was criticized in the aftermath.

“Every day now, I wake up to 8-year-old kids, 9-year-old kids giving me hate mail on Instagram, just saying, ‘I hope you break your knees and die one day,’” he said. “If your parents seen what you were saying, I don’t know if they’ll be too happy. But it’s all good, man.”

Adams, 23, said the idea for the stunt was “definitely mine.”

“One hundred percent,” he said. “It was definitely fun. I tackled him, he got up, and then he chased me down and he tackled me. I talked to him while he tackled me and I made sure he was OK. He was like, ‘Man, you got me good.’”

So good, in fact, that the mascot was hospitalized to check for injuries. As it turns out, he was just sore.

“I made sure everything was cool,” Adams said. “But he helped me up. They didn’t catch that on video, but that was one of the main things that people should see: At the end of the day, I’m all for the people and the kids. We put on a little show. It was fun.”

The Jets, meanwhile, are transitioning to a new coaching staff. They fired Bowles, who went 26-41 with the Jets – including 14-34 over the last three seasons – and hired Adam Gase.

Ultimately, what went wrong in the Bowles era?

“I just honestly feel like everybody wasn’t on the same page,” said Adams, who was drafted sixth overall in 2017. “When you have an organization or a company, everybody just has to be on the same page. We got to pull in the same direction on the rope. At times, everybody is pulling different ways. Everybody was guilty in the building. As long as we can figure that out and stay on the right course and stay together as a team, as a building, as an organization, I think we’ll be fine.”

Adams said that the Jets are excited for Gase, who spent the previous three seasons in Miami.

“A new start, new energy, and a new coaching staff – of course everybody was going to be excited,” Adams said. “Everybody just has to build those relationships and take it from there.”