(WBBM) -- In the span of a decade, Marc Maron has gone from skidding comic to podcasting powerhouse to increasingly prolific television and screen actor.

Even he seems a little surprised, but he's rolling with it. During a stop this week in Chicago, Maron discussed his latest movie, Sword of Trust, opening Friday at Chicago's Music Box Theatre, a comedy that uses American conspiracy culture as a backdrop.

Maron plays Mel, an abrasive but likeable Alabama pawn shop owner who is saddled with an oafish assistant (Jon Bass). Two women (Jillian Bell and Michaela Watkins) try to sell him a curious Civil War-era sword, and the quartet forms an uneasy alliance after they learn "truthers" will pay a small fortune for the artifact.

Hijinks ensue, a neat twist occurs near the end, but the film is probably more about the characters and the epiphanies they have along the way.

Maron, who records guitar interludes for his "WTF" podcast, contributed music to the film. It was largely improvised from a skeletal script.

Next up for the actor-comedian are supporting roles in Joker, an origin story about the Gotham City supervillain (played by Joaquin Phoenix); Wonderland, a mystery that revives the late Robert B. Parker's private eye character, Spenser; and Stardust, about a pivotal moment in David Bowie's early career.

During an interview with WBBM Newsradio, the co-star of the Netflix series "GLOW" talked about making Sword of Trust with director Lynn Shelton and whether he may try to stretch himself in future roles. First, Maron was nice enough to field a couple of Chicago-related questions.

WBBM NEWSRADIO: You do the pizza while you’re here?

MARC MARON: I do like the pizza. I’m wary to say which pizza I eat because I don’t want to start a pizza war of some kind, but I’m a Lou guy, and I’ll go to Lou Malnati’s. I know Pequod’s and Giordano’s. There’s other ones, but I like the Lou butter-crust pizza. If I want thin crust I’ll do it in New York, if I want deep dish I’ll do it here, and in L.A. I don’t eat pizza.

NEWSRADIO: This question is a trap: What do you put on your hot dogs?

MARON: I don’t really eat hot dogs, but generally when I do I enjoy mustard, onion and sauerkraut.

NEWSRADIO: On your most recent podcast, you were talking about all of the attention Sword of Trust is getting. Apparently you shot the film and you didn't know if there would be a movie at the end of the day.

MARON: When you spend 12 days moving through all these scenes, you don’t know how it’s going to come together. You don’t know if it’s going to be sold or be seen or really come together as a movie. But (Shelton) is a pro, and she did it, and it sold out of South By Southwest to IFC Films. And now it’s getting a lot of attention because I think it has a very organic funniness to it. So, yeah, it’s all been a surprise, especially the attention it’s been getting. I think it’s worthy of it, but they make 1,000 or 2,000 movies a year at this level.

NEWSRADIO: You’re kind of playing Marc Maron, and it worked well in this particular film.

MARON: I get that a lot, but I’m only kind of playing Marc Maron relative to the fact that you kind of know me. I don’t know that I’m exactly him. Anybody who does acting, they’re kind of being themselves. But this guy is a pretty broken-hearted guy. I wouldn’t say he’s cynical, but he’s definitely resigned to his place in life … I don’t know that I could live in the reality that he lives in.

NEWSRADIO: Are you going to stay within that bandwidth of the 'Marc Maron persona' or do you think one day you might be able to do a kind of Daniel Day-Lewis and take an immersive jump into a role and nobody talks to you while you’re on the set?

MARON: I don’t see myself putting on weight or learning an accent in the near future. All these characters are within my wheelhouse. But I don’t know that I feel they’re specifically me, because outside of any character I’m going to play I still have another whole day of life to live. But I think the driveshaft is my own. I’m wired a certain way. I just kind of remove and add things to my being. I’d like to keep acting and I’d like to challenge myself a bit. 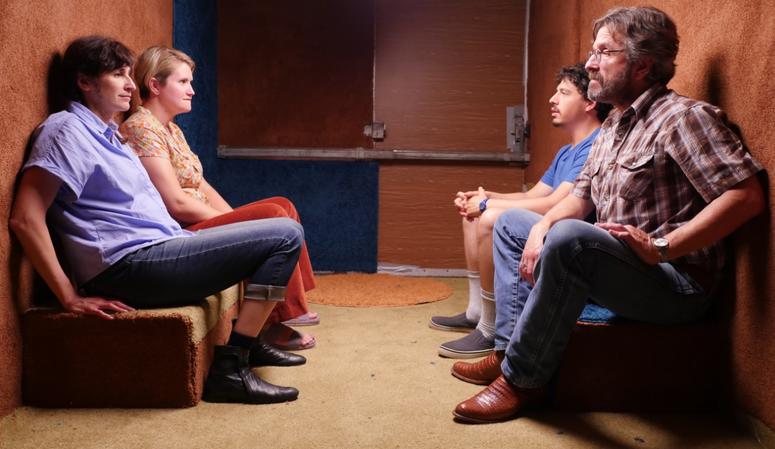 NEWSRADIO: How was it working with Robert DeNiro and Joaquin Phoenix in the upcoming Joker movie?

MARON: It was intense. These guys are sort of mythic actors. But as I’ve recorded so many of my podcasts and I’ve talked to so many famous people, I know they’re just people. Also, I’ve been booking a lot of actors on my podcast so I can have free acting lessons -- and also talk to them. DeNiro’s a quiet guy, he’s a nice guy. Joaquin was so immersed in his role, he wasn’t really accessible to talk to. But I watched him kind of pace around and smoke.

NEWSRADIO: Would you have fathomed even five years ago that these kinds of opportunities would be coming your way?

MARON: No, not really. When I started the podcast, I was pretty down on my luck and pretty over.  It was because of that act of desperation and will to post two new shows a week for the last decade that things sort of turned around and people in the world and in the business got to understand me better. Because of that, I have an audience for my standup, I have an audience for the podcast and I have opportunities to act.

NEWSRADIO: What is the lesson or the metaphor of Marc Maron, based on this journey you've taken?

MARON:  I'd already bottomed-out on booze and drugs 20 years ago, so I had sobriety under my belt. But I don't know that there was a lesson, other than I really didn't know what to do with my life and there really were no other options that I could really see. Persistence was the only thing that I could keep doing. Keep doing standup is what I did. When the podcast sort of became a thing, we just kept working. I just kept working. There was no other way for me. I guess if you're willing to sacrifice any sense security, if that even exists, and you're committed to something enough that you don't see another thing that you can do with your life, maybe it will work out for you. But there's no guarantee.

Note: This interview has been edited for length.