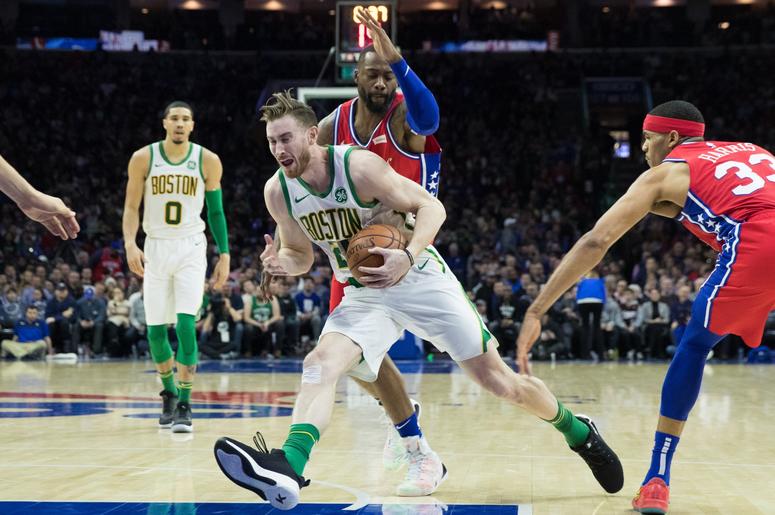 BOSTON (WEEI.com) -- Let's get this out of the way: The Boston Celtics still need Kyrie Irving.

Yes, the image of Brad Stevens' team beating the super-talented Philadelphia 76ers on Tuesday night without Irving offered a reminder of what the Celtics once were. The 112-109 win in Philadelphia sure seemed more like that gritty, gutty C's team from a season ago than the embattled group that had uncomfortably taken over the post-Super Bowl conversation.

But the Eastern Conference is better than it was last season. There is no getting to where you want to go this year without Irving. Even with this feel-good win, that should be evident.

What this victory did surface was the notion that there is hope for this team, after all.

It wasn't just the sight of players answering Marcus Morris' specific criticisms. Sure, the bench seemed to be into it. Older guys were patting younger guys on the back. Players were sharing the ball when they needed to. And, most important, the Celtics supplied top-to-bottom defense that made their whole world seem a lot more manageable against perhaps the most diverse starting five in the conference.

This time there was more.

Gordon Hayward became the guy the Celtics will so desperately need, not only going 6-for-7 from beyond the 3-point stripe but helping facilitate what seemed to be a fairly fluid offensive flow. There was little forcing the issue with Hayward entered the game, which is one quality the C's could use more of.

Maybe the real key to this whole ball of wax could be found thanks to the win in Philly: Al Horford became anything-but-average Al.

The suggestion that this might be a different Horford started with the usually mild-mannered center getting a first-half technical for arguing a foul called during his post battle with Joel Embiid. That was the sign that this wasn't just going to be another regular-season game. And then came Horford exerting his will on multiple parts of the contest, holding his own against the Sixers' center, bringing the Philadelphia big men out beyond the 3-point line (3-for-5) and simply keeping the ball alive against both Embiid and the mammoth Boban Marjanovic.

And finally, there was the guy who pushed along the Celtics' narrative for the past few days thanks to some pointed Saturday night comments: Marcus Morris.

Morris backed up his words -- and then some.

While so many are quick to stand in awe of Philadelphia's top five, now that Jimmy Butler and Tobias Harris are in the mix, it is evident that Morris can be just as valuable. Not only did the forward offer much-needed early offense with Irving out, finishing with 17 points on 7-of-13 shooting from the floor, but he exemplified the toughness that separated the Celtics last season and continued to do Tuesday night.

It remains to be seen if this was just a passing glimpse of optimism. The Celtics' path to moving up in the Eastern Conference is a daunting one. But this was undoubtedly this team's most important test to date, and they passed with flying colors.