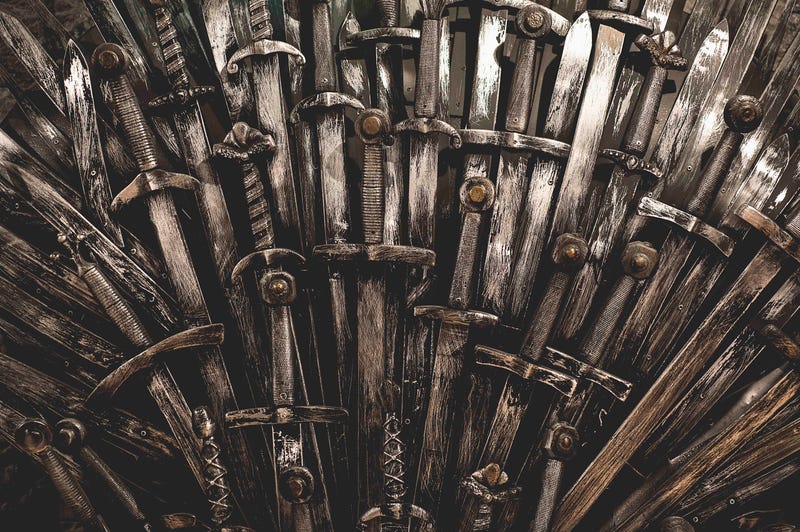 The final season premiere of Game of Thrones was short on major plot development, but long on putting the band back together—the surviving members of the Stark family reunited at Winterfell, where we were also reacquainted with some characters we hadn’t seen in a while (hi Gendry!).

But there was one character Thrones watchers hadn’t encountered before. Early in the episode Harry Strickland stood alongside Euron Greyjoy at the foot of the iron throne explaining to Cersei why exactly he didn’t bring elephants across the Narrow Sea for her to use in the coming war. Elephants are bad at boats. Who knew? But who is this guy who looks like the love interest in a Hallmark holiday movie gone LARPing? Well, he is the head of the Golden Company, which keen observers will remember has been referenced before in the show, most recently at the end of season seven when Cersei secured a loan from the Iron Bank that she intended to use to pay the company.

The Golden Company comes from Essos and they are a mercenary force—what’s known in the world of George R.R. Martin as a “sellsword company.” Think of them as the Blackwater and Strickland as the Erik Prince, minus the questionable meetings in the Seychelles.

Unlike the kingdoms of Westeros who fight for their families and their kings, the Golden Company fights for money plain and simple. In Essos that may be more important than honor or family, since it’s a region driven much more by capitalism than it is by the sort of medieval feudalism that dominates Westeros. And the Golden Company isn’t the only sellsword company in the world of Game of Thrones. The first one we encountered were the Second Sons, who we met during Daenerys’ siege of Slaver’s Bay. But compared to the Second Sons, The Golden Company is massive—the biggest of all the mercenary companies in Essos. Cersei disappointedly notes that it will only provide 20,000 men at her disposal.

What she intends to do with those 20,000 men though and how they will fare against the only-killable-by-dragonglass white walkers, we’ll just have to see as the final episodes play out.