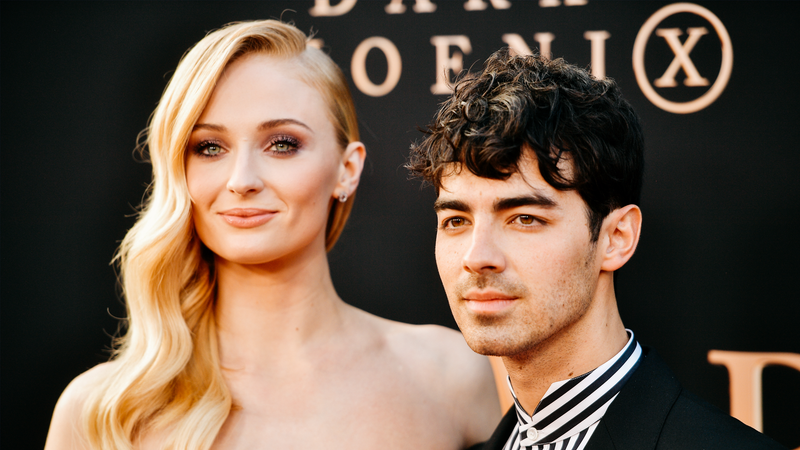 As if we weren't already unhealthy obsessed with these two, Joe Jonas and Sophie Turner just celebrated two years of marital bliss by blessing us with some never-before-seen pics from that time they used ring pops to get hitched in Las Vegas.

And even though what happens in Vegas, usually stays in Vegas, thanks to Diplo (their unofficial wedding photographer and secret leaker) we already knew the wedding was lit AF. But not gonna lie, Diplo should def stick to DJ-ing because his pics were mad blurry and we didn’t know how much we needed this additional content in our lives until we saw it.

Sharing a total of 8 pictures, the first shows Sophie and Joe just straight up chillin in a pool fully-clothed, as one normally does of course. The next picture is giving us “you may now kiss the bride” vibes. Followed by two pics of Sophie and Joe posing outside their wedding venue next to a pink Cadillac, serving some major wedding inspo in matching pink sunglasses.

In the remaining pics things shift from ceremony to party, spotted are sisters-in-law Priyanka Chopra (Nick's wifey) and Danielle Jonas (married to Kevin), and a shirtless Diplo. Followed by a blurry Sophie and lastly a pic of Joe admiring his staggeringly beautiful and statuesque wife.

Sophie captioned the series of 8 pics on IG with, "Happy 2 year Vegas Wedding anniversary to this big ol hunk of man meat" followed by emojis of a red heart, a steak and a church. Seems fitting.

Also in a sharing mood, staying on brand, and by the looks of it, in the swimming pool, Joe also honored the momentous occasion posting some pics on IG. “Married as F@$K for 2 years! Love you bub @sophiet,” Joe wrote in the caption, to which Sophie commented, "That's hot,” to which we didn’t comment, but happen to whole-heartedly agree.

Clearly not concerned with the norm, Sophie and Joe’s 2019 Las Vegas wedding was their first of two, and took place after that year's Billboard Music Awards. They later re-tied the knot with a super gorgeous and super fancy wedding in France.

Happy anniversary Joe and Sophie, and thanks for sharing.