Typically, those are the kinds of descriptions of a loss in the NFL. Likely a frustrating loss. Not this time. Not with this Eagles team. And it’s starting to remind me of a special group we saw in 2017.

The Eagles are dominating without putting together a full game. It’s not supposed to happen like this in the NFL. We default to worry when this happens, but perhaps it’s a good idea to look at this from the opposite perspective: The Eagles have had long stretches of games in each week this season that featured sloppy play or penalties. Yet all three wins felt comfortably wrapped up heading into the fourth quarter.

On Sunday in Washington, the game was over at the half. Jalen Hurts made a mockery of the quarterback that was once entrenched above him on the Eagles depth chart. The front seven wrecked the game for Carson Wentz. No one could cover or stop A.J. Brown. The Eagles did whatever they wanted on the way to out gaining the Commanders by a 400-240 ledger.

Yet, the domination (at least on offense) didn’t continue into the second half. The running game didn’t get going. Hurts (22/35, 340 yards, 3 TD, 0 TD) started 1-for-5 and missed some deep shots down the field as the game progressed. He could have easily racked up 400-plus yards while putting 40 points on the board.

In Week 1, the Eagles didn’t tackle or protect the quarterback. The game still felt like a rout in the third quarter. In Week 2, offensive penalties kept piling up and creating longer fields for the offense. Special teams haven't been sharp for any of the three games. Yet here we are with a 3-0 football team that sports a plus-36 point differential.

In 2017, I often said the Eagles reminded me of a dominant college football power house. Games were effectively over at the half. Roster talent overwhelmed the other team. It didn’t matter if mistakes were made because the other team was outclassed. It’s not supposed to be like that in a league of parity. We’re conditioned to be worried that any slight miscue will be the difference between wins and losses.

This 2022 Eagles team is bucking that trend, similar to the special one five years ago. The 2017 team had these stretches of games. The quarterback missed receivers. It wasn’t close to perfect. But the scores still got out of hand, and often quickly.

This Jalen Hurts-led offense is so explosive and dynamic that defenses have no idea what to do. Take away the run (as Washington seemed to on Sunday)? Hurts will attack with one of the best groups of weapons in the NFL. Blitz? Hurts will win with his legs. Man, zone, whatever. There are answers to every challenge, and early leads are piling up. 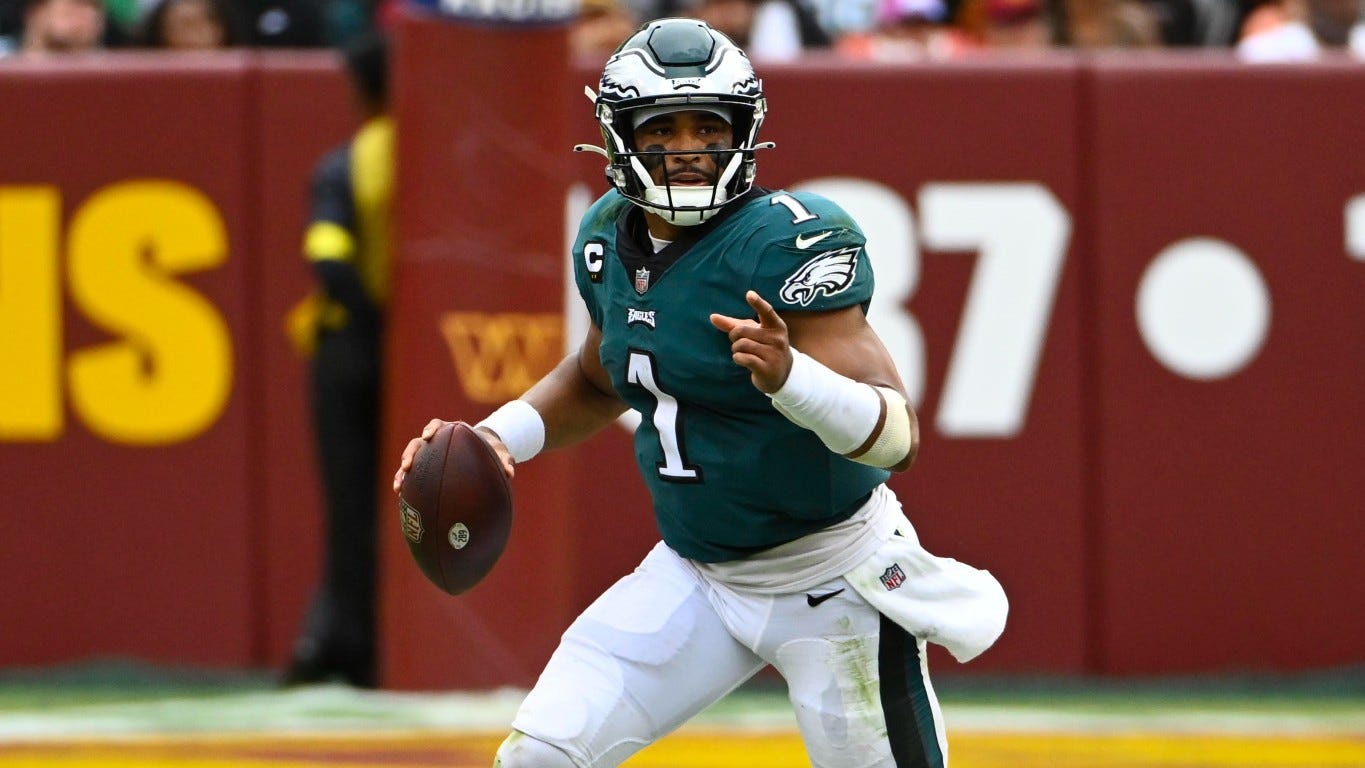 It took a game, but Jonathan Gannon’s defense is jelling. Other than Buffalo, I’m not sure there’s a deeper group of pass rushers across the NFL. This is the best linebacker group the franchise has had in a long time. There is not a better trio of corners in the NFL. The safeties are pretty good, with the potential to be better.

A challenge now awaits head coach Nick Sirianni, just like it did Doug Pederson back in 2017. As the team gets rolling in spite of mistakes, the coach must keep the team focused and find a way to hammer the importance of details. That’s for Sirianni and Gannon to worry about. As for the rest of us? We can recognize how rare this is in the NFL. The Eagles are blowing teams out of the building despite not playing close to perfect or full games.

This team is really good. If they do put it all together, they have the potential to be Super.