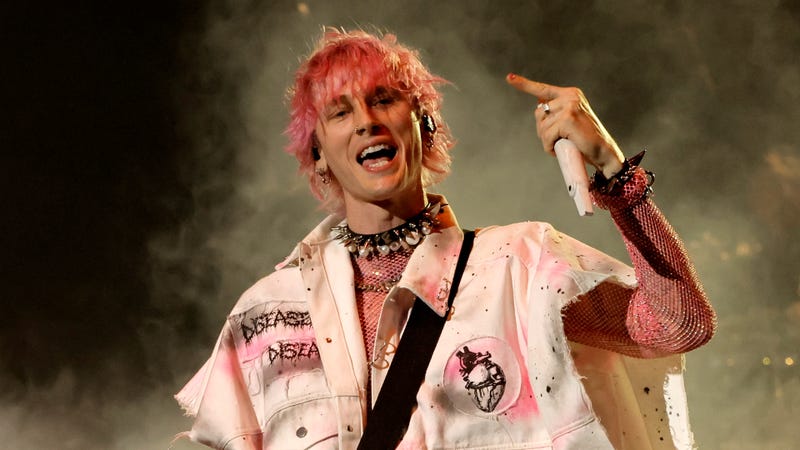 For the second time in as many months, Machine Gun Kelly shattered a glass on his head.

Last week MGK ended up with a bloody face after shattering a wine glass on his head during his hometown Cleveland, Ohio concert last week.

In some fan footage caught from the show, MGK can be seen chugging a glass of red wine before smashing the glass on his forehead, leading blood to drip down his face.

As we said, this makes the second recent bloody injury for the “papercuts” singer, who similarly smashed a champagne glass on his face in June during the afterparty for his sold-out New York Madison Square Garden show.

Evidently into shenanigans, Kelly’s hometown gig also featured a pre-planned zip=line stunt, that according to Page Six was entirely the musicians idea, and came together in less than 24 hours.

Kelly zip-lined across the entire football field-length of Cleveland’s FirstEnergy Stadium. As can be seen in the TikTok he re-posted on IG.

Before making the leap, MGK rapped a few verses from his 2010 song “Cleveland” — “Cleveland fit, Cleveland hat / Anywhere I go is where Cleveland’s at / So when the world ends, I think you’ll know where we’ll be at.”

Among inflicting unnecessary self-injuries and accomplishing crazy stunts, MGK has also been busy fending off persistent speculation circulating online that he and his twin flame Megan Fox have split up, based on the lack of couple’s lack of online activity with each other.

For those of you invested in their relationship as much as us, have no fear, it seems this these chatters are in fact nothing but rumors. According to TMZ, Megan and MGK "haven't called it quits" and are "doing just fine" with "no big issues.” So see, no need to spiral.