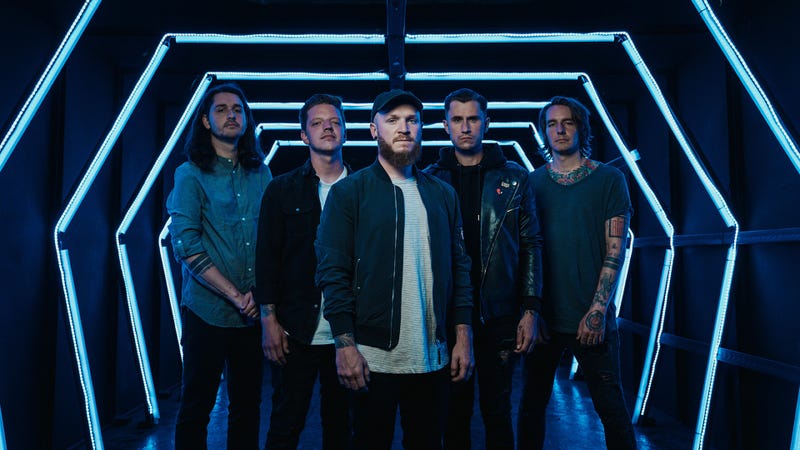 Life on the road, with the constant drone of hot asphalt underneath, and new faces in new cities each and every night, can take a toll on even the most weathered warriors. But it's been said in the Call Of Duty universe, "The Ultimate Weapon is Team," and the gamers in Michigan-based metalcore band We Came As Romans have found that bringing along a little slice of home can be a major morale booster.

Follow your favorite music now -- curated for fans, by fans -- on Audacy’s Don't Metal In My Affairs, Venom, and more!

"With the release of our new record, 'Darkbloom,' around the corner, this has been the busiest year We Came As Romans has had in close to a decade," says singer Dave Stephens. "After a short trip to Sweden for a headlining date in Stockholm, we did two tours back to back and have been on the road all of July, August, and September! All of this is incredible and exactly what we wanted. However, it is difficult to keep in touch with friends at home at times and it's also difficult to find activities to do while we are on tour."

Naturally, any gamers out there can feel the pain of being away from home base in those times of need, but where there's a will there's a way. "We can only bring items that are compact and easy to travel and fly with," says Dave. "With all this in mind, I found some pre-cut cases for transporting PS5’s and then discovered a way to mount small gaming monitors into the case. I installed all the wiring into the sides of the cases so set up and tear down only takes about fifteen seconds! After that, I cut fans into the front and side to help the console breathe!"

The only thing left was connecting to the mainframe, but the band had a solution for that as well. "After we bought hotspot towers for portable high-speed wifi, we’ve been unstoppable. These cases have given us the ability to not only game together, but game with our friends back home and easily keep in touch.”

We Came As Romans' latest single, "Golden," is streaming everywhere now. The band is also on the road, with dates currently scheduled into November. See a list of upcoming shows below.

Follow We Came As Romans on Facebook, IG, Twitter, and TikTok -- and hit 'em up If you want to kick up some digital dust with them when they're in your town or any other town.

Browse and follow more of Audacy's all-new Rock stations like Masters Of Metal, IndustriALT, Don't Metal In My Affairs, Venom, Arena Rock, Wake Up and Rock, and The Roots of Rock for those who crave the early days.