“We have to win one game at home. We’re not worried about the next game,” he said on Wednesday.

They won that one game at home, beating the Carolina Hurricanes 5-2. Now the next game is here: Game 7 in Raleigh, Saturday at 4:30 p.m.

After winning Games 3 and 4 in Boston, the Bruins went down to Carolina and laid a dud in Game 5. Understandably, the most common sentiment from fans and media seemed to be that they might win Game 6, but that they would stand little chance in a Game 7 on the road.

It can’t really be that simple, though, can it? Isn’t hockey the sport where home ice tends to matter the least? When you see the way the Bruins dominated on Thursday, including finally holding a decisive edge at 5-on-5... why shouldn’t they be able to do that on the road?

They should be able to. The formula isn’t rocket science. Take what they’ve done so well at home, and just do it on the road. Maybe see if Gene Hackman is available to come measure the size of the net or the distance between the blue lines.

In Game 6, they finally scored the first goal. It would be nice to repeat that in Game 7. But even if they don’t, they need to respond to that first goal against the way they did in Boston (by playing well and eventually tying the game) rather than the way they have in Raleigh (by looking deflated and soon giving up a second).

Jeremy Swayman has been very good at home, posting a .923 save percentage in three wins. He has made the timely saves, like a reactionary kick save on a deflected shot in the first period Thursday and a point-blank save on Martin Necas in the third period after the Hurricanes had cut it to 2-1. He wasn’t as good in his one road game, when he gave up four goals on 37 shots, including a soft first goal of the game.

The Bruins might not need Swayman to be perfect in Game 7, but they will need him to at least make all the saves he’s supposed to make, especially early on so his team doesn’t find itself chasing the game on the road once again.

The B’s got some much-needed secondary scoring in Game 6. Moving David Pastrnak back to the second line worked out perfectly, as the Bruins had 66.7% of shot attempts when he, Taylor Hall and Erik Haula were on the ice. They scored a big goal to extend the lead to 3-1 when Haula redirected a Charlie McAvoy slap pass past Antti Raanta.

The top line still generated chances with Jake DeBrusk on the right side with Patrice Bergeron and Brad Marchand. The Bruins had 70% of shot attempts when they were on the ice, and Marchand opened the scoring with his series-leading fourth goal.

The third line didn’t score at 5-on-5, but Charlie Coyle did notch a power-play goal. The fourth line, which has been pretty solid all series, finally got rewarded with a goal when their hard work down low led to a Derek Forbort shot that beat Raanta through heavy traffic. Curtis Lazar added an empty-netter as well.

This offensive depth was nowhere to be found in Game 5, though. Maybe splitting up the “Perfection Line” again and going back to the four line combinations they used for the stretch run of the regular season was the tweak that was needed.

A lot will be made of last change, especially the Hurricanes’ ability to get the Jordan Staal line out against the Bergeron line. On TNT Thursday night, Anson Carter went so far as to call Staal “that dude” and questioned whether Bergeron “has it still.”

As we pointed out, though, the “Staal shuts down Bergeron” storyline has been blown quite a bit out of proportion. The Bruins have had 62.5% of shot attempts, 61.1% of shots on goal, 67.0% of expected goals and a 2-1 advantage in actual goals in the 31:34 that they’ve gone head-to-head. Bergeron has also evened up the head-to-head faceoff numbers after getting uncharacteristically dominated in Game 1.

In Game 5 in Carolina, the Bruins outshot Carolina 10-4 in 9:21 of the Bergeron-Staal matchup. They had seven scoring chances and four high-danger chances, per Natural Stat Trick. That wasn’t just a product of Pastrnak being on that line either; shots were 5-0 Bruins with DeBrusk there after Cassidy switched things up. They didn’t score, but let’s not pretend they weren’t getting chances and controlling play.

Another big positive for the Bruins in Game 7 that they didn’t have in Game 5 is their top defense pairing. McAvoy had just returned from illness and wasn’t really himself yet. Hampus Lindholm was still out. The Bruins had both for Game 6, and their impact was hard to miss. The whole defense just falls in line, and that’s how you limit a good team like Carolina to 25 shots on goal.

Lindholm made a great play to break up a 2-on-1, which was followed by a huge hit from McAvoy on Sebastian Aho. McAvoy set up Haula’s goal, and Lindholm set up a couple scoring chances as well. Lindholm led all players in ice time.

So, there’s a lot for the Bruins to be encouraged about heading into Game 7. If they play the way they played Thursday night, they should win and advance.

Or maybe PNC Arena really is just their house of horrors and they’ll lay another dud. We’ll find out Saturday evening. 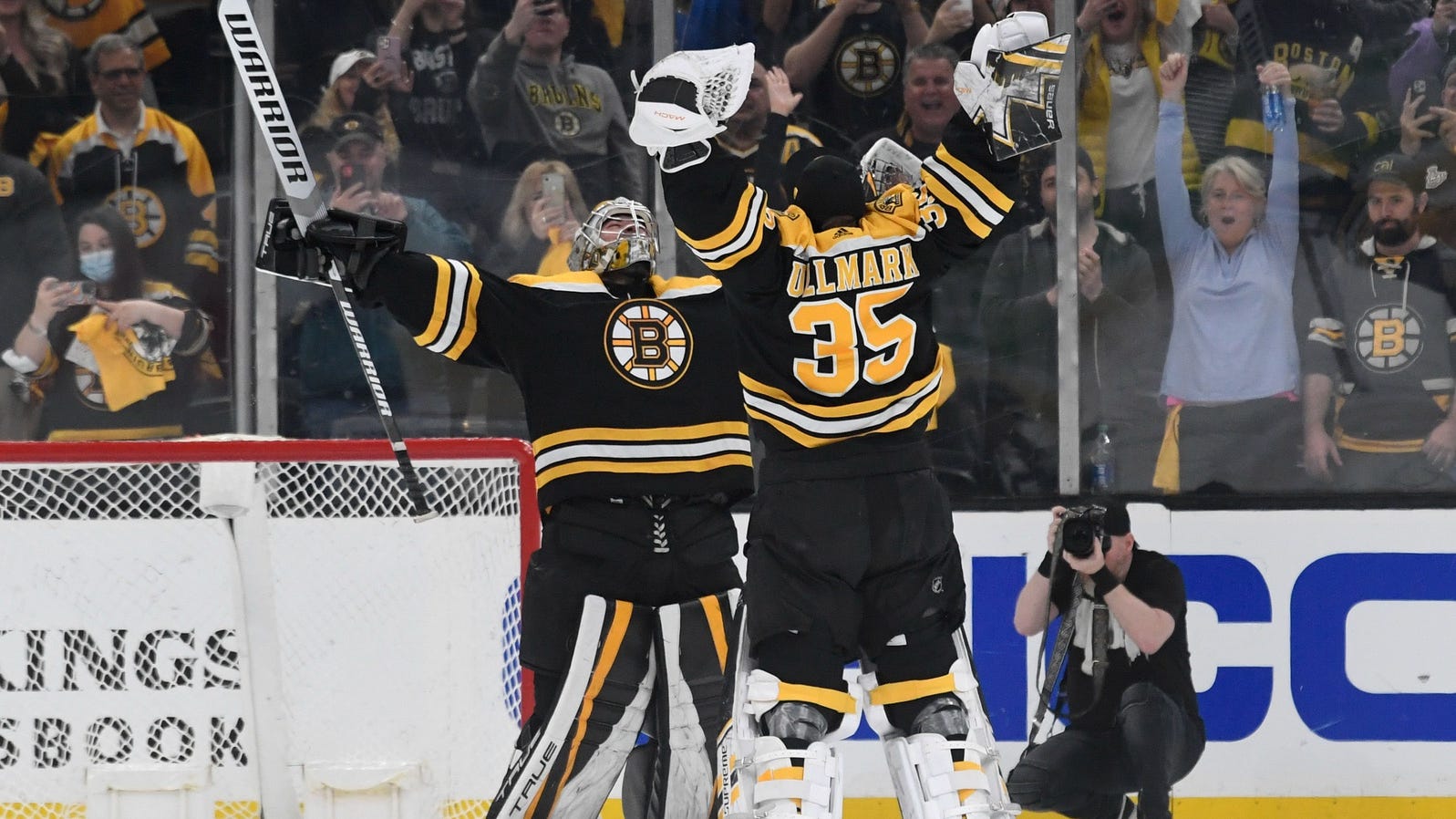 Jeremy Swayman wins his first elimination game, 'can't wait' for another in Game 7