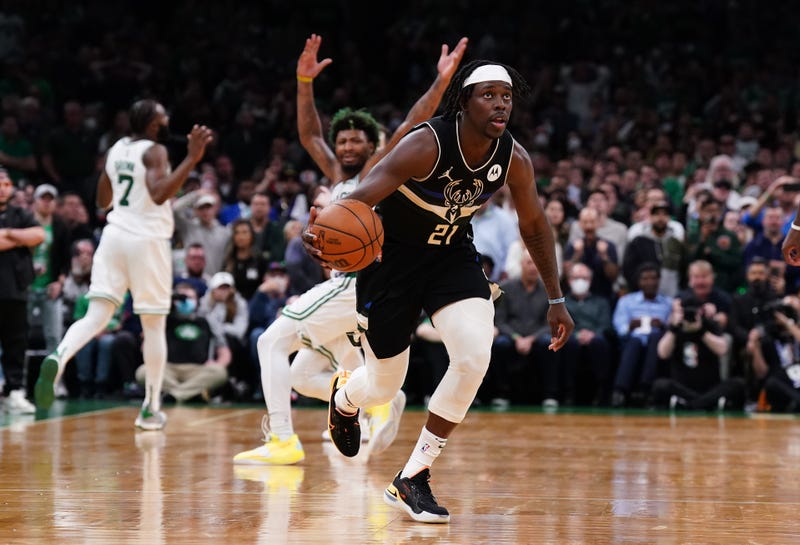 The Boston Celtics looked like they had Game 5 won, with a late Al Horford dunk sending the TD Garden into a frenzy.

But we've seen this story play out against the Milwaukee Bucks already in this Eastern Conference Semifinal series. Games aren't over until they're over.

Jrue Holiday turned on the defensive jets late in the fourth quarter, including both a block/forced turnover against Marcus Smart and then a steal against (you guessed it) Smart. Couple that with a clutch Giannis three, a key Bobby Portis putback, and two huge free throws from Pat Connaughton, and the Bucks are now one win away from the conference finals with a 110-107 Game Five win.

"I just saw Marcus drive...and I went up for some extra protection and I got the block," Holiday said of his clutch defensive stuff. "I didn't want to hit it and make it go out of bounds, I wanted to keep it inbounds. I think it's just...instinctual. It's not like I planned it out or anything."

After a tumultuous three-plus quarters, the Bucks found themselves in a 14-point hole with around 10 minutes remaining. That's when Milwaukee really turned it on and brought it all the way back to tie the game with back-to-back threes from Giannis and Holiday.

Jayson Tatum gave the Celtics the lead back after he sank two free throws with 31.1 seconds remaining. Giannis came back and was fouled sending him to the line for two free throws. The Greek Freak missed the second, but Portis was there to get the rebound and put it in to put the Bucks up by one.

On the ensuing inbound, Smart caught the ball in the right corner and drove baseline on Connaughton, but his shot attempt was blocked by Holiday, who grabbed the ball and threw it off Smart out of bounds to get the ball back to Milwaukee.

Connaughton knocked down his two clutch free throws to give the Bucks a three-point lead. The Celtics didn't have any timeouts and inbounded from their baseline. Smart got the ball dribbling up the left side, but Jrue Holiday ripped it free to finish the game.

KNOCKED AWAY BY HOLIDAY!! pic.twitter.com/EHlIwwHhBz

There was some historical significance to the final play as well: Jrue is the first player in the last 25 years to record a block and steal in the last 10 seconds of a 4th quarter playoff game.

Hear from Steve "Sparky" Fifer and Gary Ellerson as they share their first thoughts on last night's win here on The Wendy's Big Show!