While many football fans are focusing on the Super Bowl, many are still wondering where the league MVP Aaron Rodgers will suit up in 2022. According to ESPN's Adam Schefter, the Packers are willing go "all-in" and will spend close to the salary cap to keep Rodgers in Green Bay, spreading his contract over future years to entice the four-time MVP to return

The New Orleans Saints did something similar with Drew Brees in an effort to squeeze a few more years out of him while lining his pockets in a move that would help spread the cap hit in favor of the Saints.

The news breaks only a few days after Rodgers won his fourth MVP award on Thursday night. During his speech and the news conference that was held following the conclusion of the awards show, Rodgers said any of the animosity he had towards the Packers organization has all but dissipated and says he will make a decision on his future "sooner rather than later."

"I think you've got to take some of the emotion out of it and then kind of lean into understanding what it takes to revamp and feel like what's the best place," Rodgers said, stopping himself briefly. "The best decision for me moving forward -- not really place -- more just what does it feel like to commit to a season if that's what I want to do? The good thing is I still feel like my body is in a good place."

During one of his weekly appearances on The Pat McAfee Show, Rodgers hinted that he would make a decision by March 8th, the last date the franchise has to decided whether to use the franchise tag on Devante Adams. 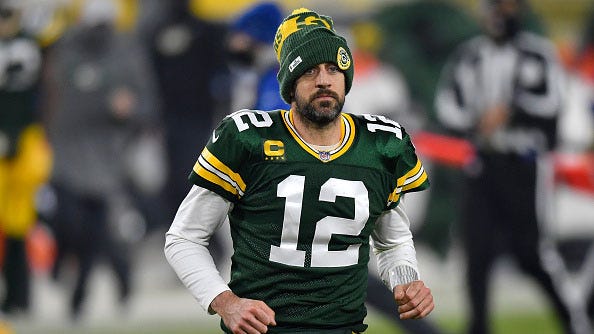 Rodgers, 38, only has one year remaining on his contract for a franchise who will be way over the salary cap in 2022. The Packers are currently $48,910,955 over their projected cap for the 2022 season according to ESPN.

One area of concern for the Rodgers is whether the Packers organization is still aspiring for another Super Bowl or if they are looking to blow up everything go through a rebuild, something that Rodgers wants no parts of. One of Rodgers' teammates, Aaron Jones, thinks that despite the controversy surrounding the Packers quarterback, things will remain "as-is."