Thomas Middleditch and Ben Schwartz make up a hilarious comedy duo whose performances are completely improvised. It's hard to be funny when everything is laid out in front of you, so doing it without a script and solely based on what comes to mind in the moment is extremely impressive. Seriously — I'm a pretty tough laugh when it comes to comedy, and outside of "Whose Line Is It Anyway?" these two have put together the best improv comedy act, and perhaps the only other one that I can watch all the way through.

But the latest viral joke from one of the two funnymen required no improvisation. In fact, it wasn't even him making the statements that were so funny. For that, all he needed was right in the palm of his hand: Siri.

Siri has got to take it down a notch. pic.twitter.com/PzBjlamGFw

Here are some of the other Siri verbs that I've gotten, along with "trounced," "crushed," and "pounded":
— The Nets soundly defeated the Bucks...
— The Nets definitively beat the Bucks...
— The Bucks were pummeled by the Nets...
And though I have no evidence that this verbs actually came up — I got tired after about the 50th time asking Siri what the score of the game was — other Twitter users say that "subjugated" was part of Siri's choice of words in describing the unfortunate fate of Milwaukee on Monday night.

An incredibly specific Comedy Bang Bang reference by an NBA team account??? Maybe we are gonna be alright after all.@ScottAukerman.

But back to the important question: does Siri always describe blowout victories/losses this way? Or is Siri just a Nets fan? Let's find out. Hey Siri, what was the score of the 49ers-Giants this year? 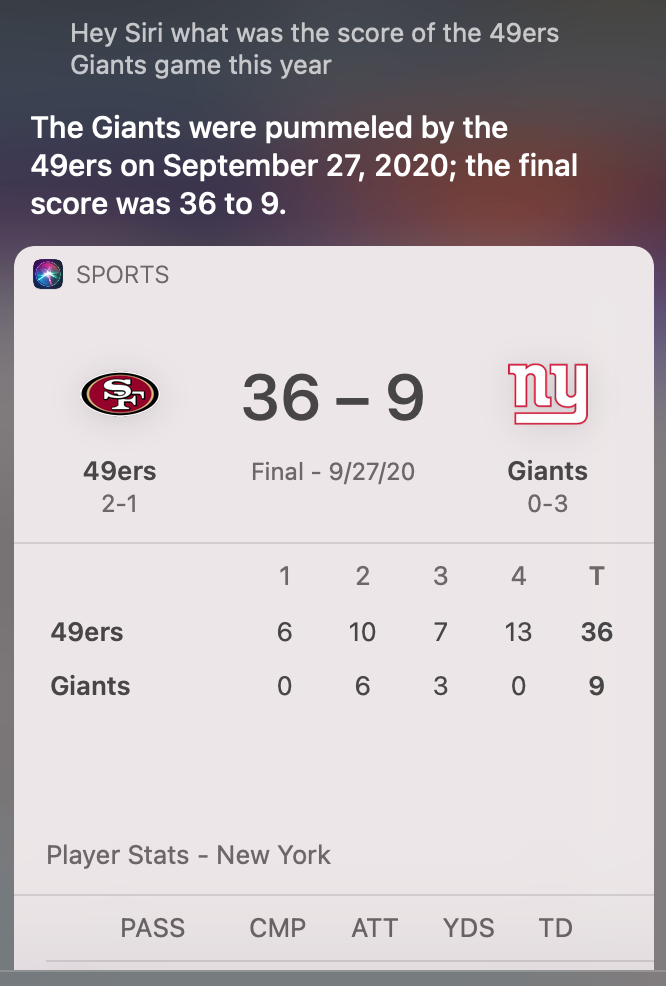 Aha! There's the usage of "pummeled." And sorry Giants fans... that was the first NFL blowout from this past year that came to mind.