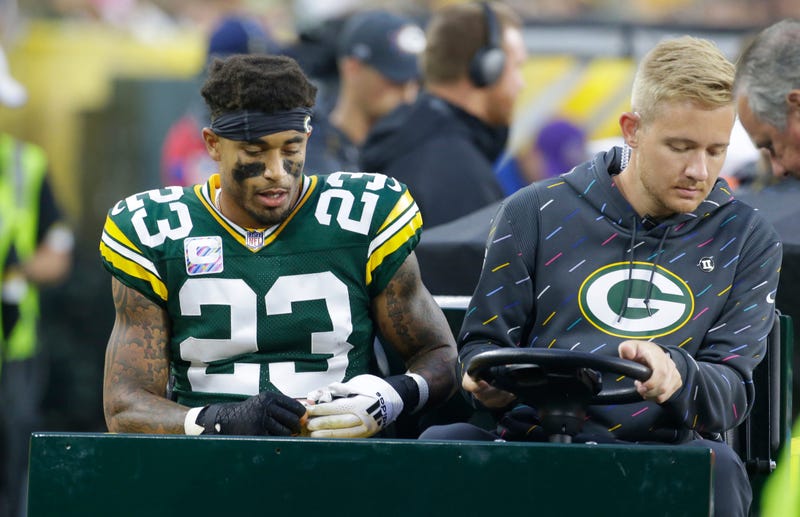 The injury bug continues to bite in Green Bay as All-Pro cornerback Jaire Alexander left the Packers win over the Pittsburgh Steelers with a shoulder injury. Alexander joins other superstars like David Bakhtiari, Elgton Jenkins, Marquez Valdes-Scantling, and Za'Darius Smith as Packers players who are currently not at 100% just four weeks into the season.

The severity of Alexander's injury is still abroad, but it has been confirmed by Matt LaFleur that it is a shoulder injury, more specifically, the AC Joint. Tom Silverstein from the Green Bay Press-Gazette said that the Packers are questioning what they should do with their stud corner, who is still on his rookie contract. Silverstein is hearing that Alexander could potentially play with the injury, which is why they are trying to get as many opinions as possible:

Bottom line for #Packers CB Jaire Alexander, according to a source, is can he play safely with a shoulder brace, does he just need some time to heal or is it longer term. That’s why the injury is being looked at by multiple specialists. #Packers need to get this right.

Silverstein's compatriot from the Green Bay Press-Gazette Ryan Wood joined the Big Show Radio Network and told the guys that the Packers have to be very cautious with what they do next. He says Alexander may be the best corner in the league and his future with the team is much more important than right now.